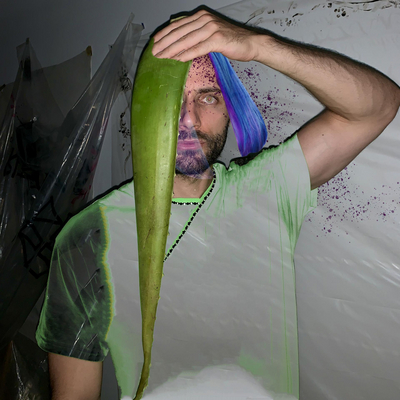 Born in 1994 amid the first apparitions of the World Wide Web, the fleshy figure of Zander Porter developed near the ocean and mountains of (Tongva) Topanga (Santa Monica Mountains in Los Angeles, California). Virtual-Zanders “Freshy” (2005-2008), “ORGZurvivor” (2007-2012), and “athlete__22” (2009-2013) comprise adolescence, circumscribing the ancestral function of xyr Jewish-masculinized body’s bar mitzvah in 2007. Zander later acquired a high honors BA in Art Studio with additional coursework in Computer Science and Performance Studies from Wesleyan University in 2017, graduating a member of “Phi Beta Kappa” and nominated for University Honors after receiving the Elizabeth Verveer Tishler Prize for thesis work. Zander completed additional programs in Game Development in 2015 at DIS Copenhagen and German Language in 2017 at UCLA. In 2017, in Berlin, ze became a core member of XenoEntities Network, a platform for discussion and experimentation focusing on intersections of queer, feminist, and gender studies with digital technologies. Since 2018, Zander develops further work at the junction of liveness and onlineness, proposing performance and (or as) JPEG/MP4 files in visual-performative realms as well as for the website, nightclub, and university.

Zander’s research motivates towards queer modalities and temporalities of being-with the self and its others, situated somewhere necessarily between the “virtual” and the “physical.” Through role-playing and disidentifying in scores for self-presenting and expressiveness, Zander asks about the choreographic relationship between image and affect. Practices within game engines, chroma keying, laser scanning, and analog photography generate past-present-future imaginings for the (re)production of the body in unique spacetimes: denoted and archived in xyr practice with “project titles.” The penetrative (or dildo) and omnipresent (or prosthetic) qualities of surveillance technologies inform Zander’s curiosity about how selves dissociate, disembody, and eroticize. Modular characters emerge thereon, remixing with those of collaborators and dancers, yielding narratives more closely aligned by hormonal subjectivities than premeditated conceptualizations of working themes. Zander interprets the technological scope of “naturally-secreted” adrenaline, dopamine, and testosterone (among other neurotransmitters/steroids) to practice a constant re-understanding of social movement in the spatiotemporal “onscreen-offscreen.” In mathematics, an identity function/map leaves an object/value unchanged; does this render identity nildimensional? Through relational portals opened by digital expressions like emoji, emoticon, and kaomoji, Zander interpolates the replicant into endeavors for unlocking/engendering variant, hyperspherical “identity matrices.”