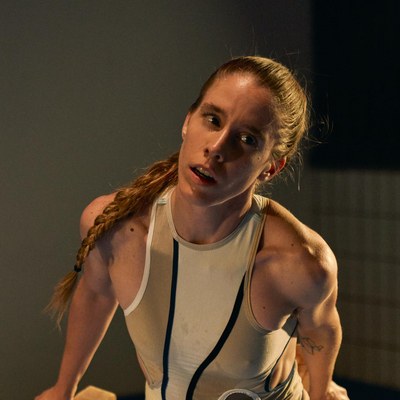 Simone Gisela Weber is a Berlin-based artist, performer and choreographer. She studied theatre and cultural studies at the University of Leipzig and graduated from the Hochschulübergreifendes Zentrum Tanz Berlin (HZT) with a BA in dance, context and choreography. Throughout her artistic development she has established long term artistic collaborations and a solo artistic practice, which she increasingly fuses together after keeping them as separate artistic agencies.

In her solo artistic practice she works at the intersection of choreography, text and performance. Her interest lies in the construction of complex physical and visual compositions in which the body is placed in a state of risk. She believes that the confluence of forces from the material and immaterial worlds brings out the unknown and the unusual. In her work, she draws inspiration from ubiquitous habits and bodily states, which she critically questions through an interplay of different media.

She is co-founder of the performing arts collective “Kimberly Kaviar", which has developed various experimental performances and installations that explore theatrical dispositifs as well as themes around creative processes and artistic collaboration. Kimberly Kaviar developed works such as Veneralia (2015), 3D WHITE (2016) and Foundation (2017). 3D White was invited to the P-Bodies Festival in Leipzig. MANIFEST: A Work on Progress (2017), an eight-hour performance installation, was shown in Berlin at Uferstudios. In Retrospective: Ecology of Occupation (2017) they experimented with the workshop format, and this work was shown in the Super Local Berlin series by Constanza Macras/DorkyPark at Studio Verlin and was invited to the Performatica Festival in Puebla, Mexico.

In 2021 Kimberly Kaviar realized the video essay and performance installation LEASHED UNLEASHED in cooperation with Ringtheater Berlin and Theaterhaus G7 Mannheim, supported by Fonds Darstellende Künste with funds from the Federal Government Commissioner for Culture and the Media. Kimberly Kaviar was selected for the LAFT Berlin's "Newcomer" mentoring program in 2018 and mentored by curator Ricardo Carmona in Berlin until the end of 2019.

Together with Julia Keren Turbahn, Simone maintains a long-standing artistic collaboration, working on the state of hesitation as a productive force. Hypothetic Bodies (2021) is her latest choreographic work in this series, which explores odd temporalities and the potential of stasis, and first premiered in digital form in collaboration with Uferstudios Berlin and Maschinenhaus Essen. Hypothetic Bodies was supported by the Fonds Darstellende Künste with funds from the Federal Government Commissioner for Culture and the Media and Kunststiftung NRW.

As a performer Simone has worked with deufert&plischke, Anna Aristarkhova, I -Jung Lim, Ellinor Ljungkvist, Sanna Blennow, Jan Rozman, Nile Koetting and Boris Charmatz among others.

In the frame of DAS Choreography program, Simone continues her research around the question of how choreography can unfold into different shapes of landscapes in which bodies collectively are simultaneously immersed into, looking at and are looked at?

In her practice Simone is looking for odd encounters between the human body/bodies and different tangible/intangible, visible/invisible, remembered/forgotten materialities. What kind of bodies will these encounters and clashes form and provoke?

She is increasingly interested in paper and soil and their social, figurative and physical formations which theses materials can develop. Question around mutual control mechanism and labour also circulate within her research practice.

Inspired by her twin identity, Simone will continue working on the conflicting notion of having multiple bodies. In relation to this identity conflict Simone wants to investigate how we can practice a different form of belonging to the world: a belonging which unfolds itself in longing for connectedness. The question of belonging is a question of identity: who are we, what do we relate to and where do we place ourselves in the world? Belonging demands a place of memory and vision that shapes us.

By working with human bodily textures such as voice, flesh, breath and memories as well as morethan-human texture she will explore how a choreographic sensual situation can be created rather than a stage event. Thinking of human existence as being ‘inside’ and interwoven with its surroundings instead of separated from it, allows her to play with the idea of being attached through a vast tissue that unfolds in a large skin. In the frame of bodily explorations she attempts to build a ‘new cosmology’ which enables her to practice new forms of encounters. By attempting to understand the impact of each action and motion she asks: How can landscape unfold in choreography as a tangible cosmos that allows us to reflect and rethink our belonging to the world?