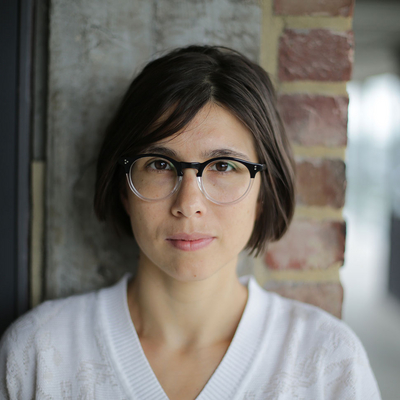 The work of Berlin-based ethnographer and choreographer Miriam Jakob is situated at the interface of research (social science) and fiction, in which she transforms anthropological subjects into performative poetic material. Her solo Friday 1.23.15 [sic] “as usual, sorry that I do not always…” (2012) received the jury prize at HAU and Sophiensaele’s  100° Berlin Festival and was shown on various other occasions. In 2014, she realized the ensemble piece Travelling to the Four Corners of the Earth, which was funded by the Senate of Berlin. She has also been involved in various collaborations, amongst others with the duo deufert&plischke. In 2016, she received the Berlin Senate’s research stipend, and is currently conducting research in the field of animal representation and inter-species performative exchange.

Miriam Jakob on her research: Inspired by the films of the French cinematographer Robert Bresson, in whose films the boundaries between the human and the inhuman, the living and the dead, the animal and the mineral “collapse into a zone of radical aesthetic indistinguishability ”, as Rancière says, I want to investigate the performative possibilities of human-animal cooperation. During my research I will examine what this ‘radical equality’ could mean for a choreographic context. I want to question the function of the human-made boundary between human and non-human primates and explore the consequences of altering or eradicating the boundary lines. What conclusions can we draw about human beings by looking at our representation and description of animals?

During the DAS programme I want to document the heterogeneous relationships of human and non-human primates and incorporate these into my artistic practice. Therefore I will visit zoos, habitats that I consider to be interfaces or meeting points for the encounter between humans and non-humans, solely separated and protected  by a glass wall that paradoxically permits us to be close to each other. Through different choreographic arrangements and experiments, I want to facilitate an inter-species performative exchange that goes beyond language and domination.