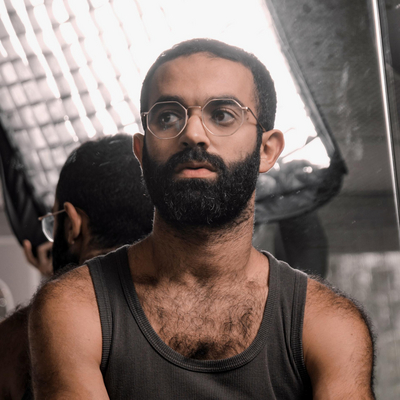 My artistic practice dives and floats in and through togetherness, proximity, and entanglement. I often work in collaboration, engaging with the materiality of ropes, water, heavy bodies, and long duration.

where/when does this one person end and the next person start?.. how does it feel to be arriving at the ‘next’ situation?.. how/does the moving body separate from the ‘previous’ situation?

An ecotone is a transition area between two biological communities, where two communities meet and integrate. […] (e.g.: the zone between a field and a forest) – Wikipedia.org

Liminality is a state of transition between one stage and the next, especially between major stages in one's life or during a rite of passage. – Dictionary.com

Ahmed El Gendy (Cairo, 1987) is an artist/choreographer based in the Netherlands. They/He studied dance at Studio Emad Eddin Foundation in Cairo, Egypt (2011), and holds a bachelor in choreography from the SNDO – School for New Dance Development in Amsterdam (2019).

Ahmed works through video and live performance; physically experimenting and exploring notions of agency and interdependance. Their works showed at Mediterranea 16 Biennale in Ancona, Italy (2013), and at Festifreak International Festival for Independent Cinema in La Plata, Argentina (2019)