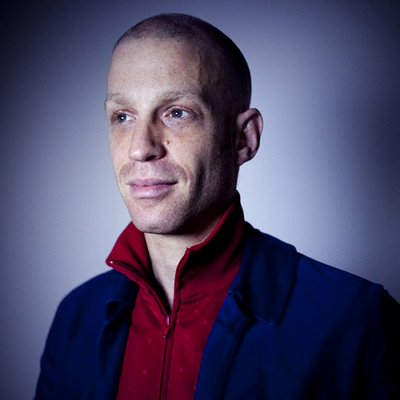 Nir Nadler (1977) is a Dutch-Israeli artist based in Amsterdam, since 2006 he is part of the artist duo Hertog Nadler together with his partner in life Chaja Hertog (1978).
After graduating from the Gerrit Rietveld Academy in 2006 (Audiovisual department) Nadler joined DasArts in order to expend his oeuvre and experience of the live arts. In the performance-installation Mind the Gap (2009) the invisible boundaries that exist between lovers is highlighted  when Hertog is suspended by transparent wires above Nadler, for the duration of two hours. In their film Nation for Two (2008-2012) the absurdity of national border restrictions is addressed. This film premiered at NFF (Utrecht), was selected as one of the best ten Dutch shorts of 2012 by Eye Film Institute and won several international awards. Nadler’s graduation project at DasArts, a dance film titled Harvest (with choreography by Aitana Cordero Vico), premiered at the EYE during Cinedans 2013.

Other work by Hertog Nadler has been exhibited widely in places such as Museum of Contemporary Art in Taipei, Janco Dada Museum in Israel, Torun -Centre of Contemporary Art in Poland, Kassel Kunstverein in Germany, Chuncheon Mime Festival in Korea and New York Live Arts in the United States. The duo also expands their professional practice by attending international art residencies such as Skowhegan in the United States and Seoul Art Space Geumcheon in South Korea. Currently they are working on a large-scale public art in the Netherlands, commissioned by the city of Zwolle with funds from the European union, which will consist of a site-specific-video-installation, outdoor-sculptures and a meandering led-line connecting between all segments.

In the Heat of the Day