Asa Horvitz - A Dream That Belongs To No One 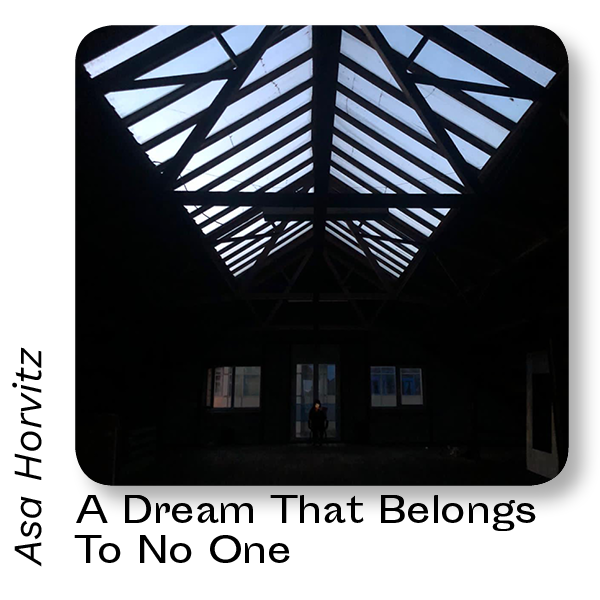 Sometimes a dream gets all over my body and won’t leave me alone. It’s sticky or rough or just a constant pressure on my chest, stomach, groin. The image and feeling linger for days and something, slowly, almost
imperceptibly, changes in me. Then I think of Ibn ‘Arabi, who wrote of the Alam-al-Mithal, a layer of reality in which dreams and images exist without us. The presences in the Alam-al-Mithal are not made up,
but have their own desires and needs.

It’s interesting that a dream is always whatever image. It’s specific, absolutely exact in its details, but it doesn’t matter what it is. What matters is that it arrived, it grabbed me, it came from somewhere, I can’t say where, but I can feel that it needs attention.

A Dream That Belongs To No One opens up an in-between space for images and dreams to emerge. In an attic at the hour of sunset, long wires tuned to the resonant frequencies of the space are bowed and plucked, creating a sonic landscape in which the audience is invited to sink in and let the hours pass. Through a process (score) in which songs, gestures, and physical actions are re-arranged and looped,
performers create an environment for whatever images to arrive, be listened to, argued with...

Asa Horvitz is a composer and performance maker whose work has been presented in the US and Europe. He studied composition with Alvin Lucier and Anthony Braxton, and spent seven years studying psychoanalysis and various ways of working with dreams. Recent work has been supported by Fondazione Prada Milano, ResKeil, Goethe Institut Hong Kong, and IMPOSSIBLE BODIES (NL). Asa lived in Poland and New York City before coming to DAS, and besides A Dream That Belongs To No One, is currently working on BASEBALL, a performance examining US mass shootings as an instance of possession by images, and GHOST, a staged concert using an AI system to think otherwise about archives and death.