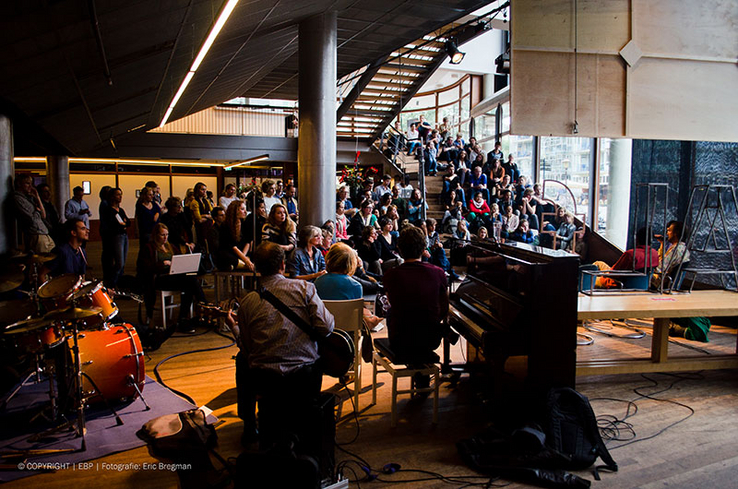 At half past five the jingle of Krapp’s Last Band sounds. What follows is a public talk of one hour. Students, teachers and other interested people have gathered in the central hall of de Theaterschool. To listen, enjoy and join in the discussion.

Former students talk about their latest projects, guest teachers from home and abroad reveal what drives them. Within an hour, a wealth of current events unfolds that are scheduled to take place in or outside the Amsterdamse Theaterschool. And that every week again: Tuesday at half past five.

Performing  arts in transition, is the new name of the research group, that recently initiated the HALf6 public talks. ‘It’s a title I want to formulate emphatically as a question’, says head of research Marijke Hoogenboom. ‘It’s obvious by now that the theatre landscape has changed dramatically after all the budget cuts. As far as I’m concerned, we are at least obliged to also take time to fully understand what the actual consequences are for artistic practice. What choices do performing artists make today? Which places and what kind of audience are they turning to? Which new working structures and production models are evolving? The situation is vulnerable for everybody and creativity is not an inexhaustible resource; what is feasible  - and necessary - for a healthy artistic environment in this city?’

‘The Dutch Theatre Institute (Theater Instituut Nederland) is defunct, funding bodies and the Council for Culture (Raad voor Cultuur) have been downgraded. The legacy of the performing arts, but also the value of our knowledge and the essential role we play in society is threatened to become invisible. This greatly concerns me and I don’t hesitate to take responsibility with the possibilities a research group can offer.’

Thus oberserving and analysing,  based on strong ties with the professional field, but also creating a breeding ground for change within the school itself. Conferences, publications, updating theory education, expanding the masters and initiatives like the weekly HALf6 public talk are ways to achieve this. Marijke: ‘Art education is not just a private but also a collective business. The school doesn’t cater purely for individual talent. Teachers, artistic directors and students together contribute to the development of the arts and how those relate to the world.’

Even though ecology, migration and instable markets may seem to be distant concerns, as performing artist or school you can’t remain ignorant according to Marijke.

Marijke: ‘This is the second aspect of my central question. We live in an age when everyone should feel the urge to ask what we can add to a world that simply has to change if we still want to be around in five generations time. With Jan Zoet we have a director who recognizes and supports the need for transition unreservedly, which creates plenty of opportunities to take action. Firstly, by maintaining a sharp-witted stance as critical community within de Theaterschool and giving precedence to mutual dialogue and communication with the professional field and the city of Amsterdam.’

Marijke: ‘Can we turn our central hall into a public square? A open space where we can practice talking, discussion and disputation? Initiated by the research group, six dramaturgy and philosophy teachers of  de Theaterschool have taken the lead for holding a weekly public talk. Marijke: ‘I believe we can say that the HALf6 is a success. It’s widely supported throughout the school. I’m incredibly proud that the editorial team has grown to such an extent that its members no longer fit around one table. The authorship no longer lies solely with the research group but continues to grow , traversing departments, positions and generations. For me that’s the essence. You notice that from a limited, individual perspective, bottom-up initiatives within a larger context are now starting to happen.’

The public bookshelf also belongs to the idea of the central hall as a public square. ‘When the Theatre Institute closed, nine cubic metres of scripts and books were left with no place to go. Together with our librarian, we selected twelve boxes and housed them in the Theaterschool.’ The bookcase works like a classical public bookshelf, take what you find interesting and contribute something if you want to.

And to conclude: de Theaterschool 24 hour happening. Also an initiative of Marijke and her Platform Dramaturgy/Theory. On 8 and 9 November, Jan Zoet will hand over the keys of the school to the students for 24 hours: 550 students, 8 floors, 24 hours. With a programme for neighbours, friends, acquaintances and other audience. Marijke: ‘It’s completely in the hands of the students, they have their own project team, their own concept supported only by a few teachers, artistic directors and the technical departments. Everywhere in our building we  have assigned certain functions to classrooms, studio’s, workshops and offices, but ultimately the imagination reaches much further and secretly everyone longs for alternatives. I hope it becomes an animated rediscovery of what de Theaterschool and theatre can be.’ 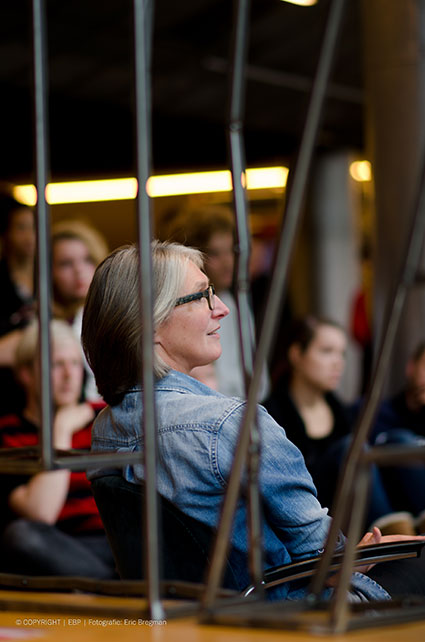