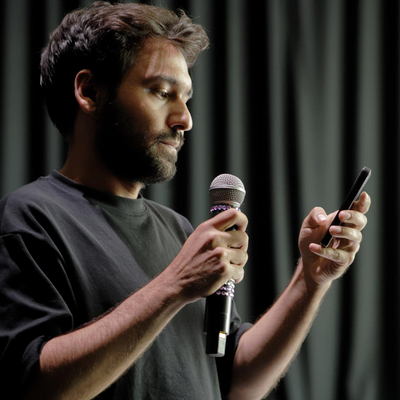 Fariborz Karimi, born in Tehran, Iran (1990), received his bachelor's degree in Theater Directing and Acting at the University of Tehran (2009-2013). He founded Bohemi Theater Collective with his fellows in 2011 and since then they have produced numerous performances, residencies, and workshops as a collective. Since 2015, his works have been shown in Tehran’s public scene and at some international festivals including ITFoK Festival Kerala, BOZAR institute Brussels (Welcome to Tehran), ACT Festival Bilbao, and ITS Festival Amsterdam. Besides his performance career, Fariborz is the co-founder at Reconnect Festival (2020) as well as the founder and artistic director of Theatricultural Exchange Residency (2017-2019). Currently he is a Master’s candidate at DAS Theater School, Amsterdam University of Arts (2021-2023).

Fariborz Karimi’s artistic research is focusing on the spectator’s imagination and the act of collective listening. He works with different materials such as text, soundscapes, mundane conversations, and phone calls, in order to create an overlap between outside and inside spaces. Through his practice, Karimi explores fragments of socio-political issues in the mundanity of everyday conversations.

Furthermore, he questions how different spaces, apart from their geography, could overlap or be birthed from one another. Considering this, he uses storytelling strategies and choreographic text between fiction and reality, shifting between languages (Farsi and English), and theatrical tricks to create the illusion of a liveness. Currently, Fariborz is experimenting with new forms and materials as his focus is to refine and expand his formal and visual language.