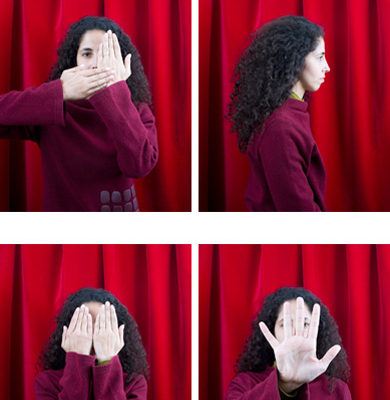 Laila Soliman (1981, Egypte) was living and working in Cairo as a theatre director and playwright before she came to DasArts. She is interested in  the different forms of sociallly and politically aware theatre, for example in the performances “…At your service!” (2009) and “Spring Awakening in the Tuktuk” (2010). When Laila came to DasArts, she had just witnessed the Arab Spring, which strongly influenced her work. Her goal was to explore the balance between documentary material and fiction, searching for formats that would engage audience members who are not directly affected by the subjects she handled. During her study, Laila toured internationally with “Lessons in Revolting” and “No Time for art”, a documentary theatre series on military and police violence. Her graduation piece transformed the DasArts building into a living museum of state security systems, based on a research in Rabat, Berlin and Cairo. After graduating, a "remake" of this project was part of the Berliner Herbstsalon at the Maxim Gorki Theater. Laila's latest project is called 'Hawa Elhorreya' or Whims of Freedom'. It pieces together stories of Egypt's 1919 revolution, inevitably drawing parallels to the present, thus reading the past through the present and the present through the past. It is still on tour in Europe. Laila lives and works in Cairo.