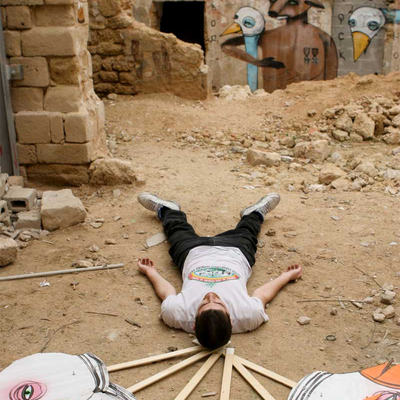 A choreographer, performer and teacher; born in Byelorussia, Immigrated to Israel in 1990, currently lives and creates in Tel Aviv. His independent works are presented extensively in Israel and worldwide.

In 2008, 2009 and 2011 Arkadi Zaides was awarded Israel’s ministry of culture and sport prize for young artist in the field of dance. In 2010 he has been awarded the prestigious Rosenblum Award which is awarded annually by the city of Tel Aviv. Zaides's choreography 'Solo Colores' was awarded with the prestigious Kurt Jooss award in 2010.

Embedded in Arkadi’s work is a belief that the role of art is to challenge and inspire viewers, while simultaneously it has a larger universal role to reach out and bring together different communities and different sectors of society. Arkadi is increasingly working in diverse communities, focusing primarily on the Arab sector in Israel.

Arkadi Zaides's research is intertwined with the shifting personal and political realities of working as an Israeli choreographer. He has been observing physical perspectives of the moving body from positions of contextual immersion and distance. In the AMCh programme, he will continue to negotiate ' the impact in the body and on the dance when living in a conflict zone environment.' His plan includes four detailed  steps: 1) nurturing exchange between artists from different geographical places; 2) analysing his work process with experts and mentors; 3) creating a movement-based research methodology; and 4) sharing this research practice with peers and publics.