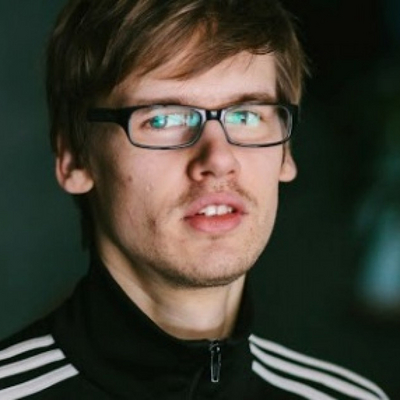 Jānis Balodis is born in 1987 in Riga when it was part of USSR. He grow up in Riga when it was (and still is) a part of Republic of Latvia. A place that was very much trying to catch up on things that were absent during the 50 years of occupation, like Neo-liberal free-market capitalism and free and fair elections.

He is been working in theatre professionally since 2009 as playwright, dramaturg and occasionally as a performer. He also has been teaching drama at school and playwriting at the Academy of Culture of Latvia.

His main interests in theatre are related with society, asking how are we here together? And are we together at all?

At the moment his research is around theme of darkness. He thinks that less light can be frightful, and it can also create a situation where something that is unseen during the bright exposure, becomes visible in a less amount of light or in complete darkness. His perception of darkness at the moment is expressing itself as an image of “end of everything”.

“End of everything” is seen as a situation where there are bunch of people dancing and dancing and there, very close to that place is as a corner, and there around that corner is a little, mischiefing kid waiting and smiling grimly. And those people - we, we are still trying to dance to that last song which is playing. Trying to take the last breaths before inevitably going to turn that corner. And when the corner is turned, we know that we will be completely destroyed, devoured, eaten and gone.

Could this situation be a hope for an individual living here and now?

To work on an applied theatre project during the rest of the summer of 2020. To create an audio walk/performance that mixes the Latvian electronic underground music, life of stories of the people who created that music and stories from the neighbourhood where I live and where most of that music was created. I am also looking forward to taking part in the European network ACT: Art, Climate, Transition, that is a collaborative project between theatre institutions around Europe.

The Trip to the Whole Castle

“The Trip to the Whole Castle” is a work of theatre made to be live streamed. It takes place in suburbs of Riga, Latvia, and consists of a journey through the city to a dark attic in an old wooden house. It is a trip through time and memories. It is a journey where the audience is invited to eliminate borders of the screen and become present at the side of the story. It is a proposal to meet your childhood memories, invisible entities and to take a rest with us in the warm and dark attic. For everything to happen, we advise you to stay half asleep and half awake.