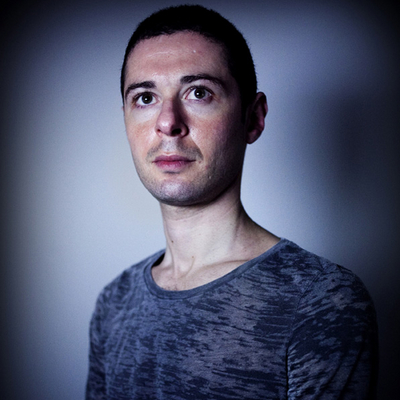 When Ash Bulayev came to DasArts, he had already worked for over ten years as producer, programmer and artist, with a broad range of European and American institutions at the cross-section of performing arts, new media and research in collaborative processes. From 2002-2011, he was a Co-Artistic Director (in collaboration with Tzeni Argyriou) of amorphy.org, a collaborative platform for experiments in the fusion of performing arts and old/new media. In 2006-07, he was the project initiator and research director for the EU Culture 2000 funded project i-MAP (Integration of Media and Performance) in collaboration with leading media arts organizations in the Netherlands, Germany, Greece and Bulgaria.
At DasArts, Ash further explored his fascination for "the outsider, the other" and created a live game situation generating dynamics of inclusion and exclusion, with additional subsidies from Amsterdam Zuid. Following his graduation and long-term residency in Brazil (Insitituto Sacatar), Ash became the Senior Curator for Contemporary Performance at EMPAC (Experimental Media and Performing Arts Center) in New York. Besides other artists he has commissioned or worked with at EMPAC, Ash invited several artists and ex-peers he got to know during DasArts for residencies and presentations (a.o. Kris Verdonck, Eric Joris, Rabih Mroué, Igor Dobrocic, Peter Stamer, Maria Kefirova, Miguel Angel Melgares).