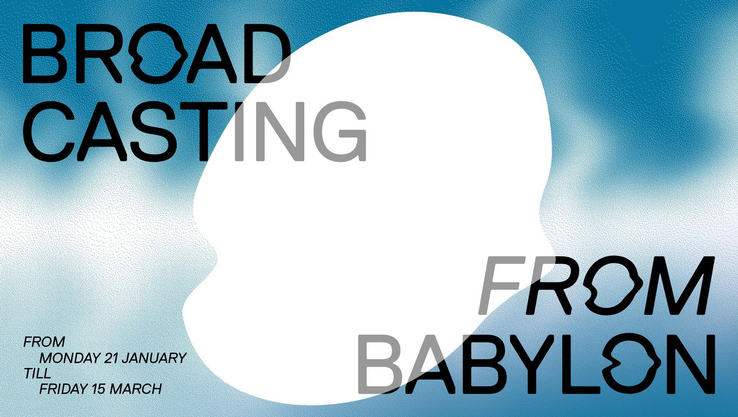 How can we listen to, understand and learn from each other in today’s polarized societies? The solution, according to organisers Amal Alhaag and Maria Guggenbichler, curators of this year’s DAS Theatre block programme, Broadcasting from Babylon, is to ‘develop bridging skills’. This is the first time that a block is fully accessible to the public. Says DAS Theatre director Silvia Bottiroli, “It’s all about creating communities.”

This year’s DAS Theatre block programme, Broadcasting from Babylon, digs up and examines the imperial and colonial histories of Amsterdam, Holland and Europe. As block curator Amal Alhaag explains, “We will address questions like: How do these violent histories shape our societies, social relations and local contexts in present-day life? How and when do we experience these histories? How do they affect our everyday lives, realities and communities?” Block curator Maria Guggenbichler adds, “The programme consists of many types of public learning situations: workshops, walks, seminars, bike rides, boat rides, reading groups, dance moves, and parties. It offers possibilities for self-education – together and in public. And it’s all for free!”

Ex-centric thinking
Amal and Maria, Amsterdam residents and close friends, share a long history of organizing gatherings, programmes, pranks and events together with a network of international and local experts, academics, artists and activists. From 2013 to 2016, they ran the Side Room, an informal platform for ex-centric and counter-cultural thinking and practices in Amsterdam.

Their educational programme for DAS Theatre offers a broad and very diverse week-by-week agenda, ranging from a boat ride with Jennifer Tosch from Black Heritage Tours to creating a performative gesture with activist and writer Quinsy Gario; lectures about non-white avant-gardes and street cultures; workshops on political listening; and performance work. There also are weekly decolonial consciousness-raising groups led by Hodan Warsame (co-initiator of Decolonize the Museum) and artist-educator Ayesha Ghanchi. Amal and Maria themselves will lead a weekly gathering in which the participants will watch selected films, read texts, view works of art and discuss theory and practices related to the block’s thematic focus. “But there’s much more”, says Maria. “So please check our programme online if you are interested in participating!”

Dystopian Western system
What do they wish to express with the title ‘Broadcasting from Babylon’? “The term ‘Babylon’ was initially used in the Rastafarian movement to refer to the dystopian Western system, the violence and destruction it has spread around the world”, explains Amal. “It describes the Western system from the point of view of people who are its victims: deported, enslaved, exploited, dispossessed, killed. Also, it describes the Western system from the periphery: from Jamaica, the Caribbean, the diaspora. Throughout the years, ‘Babylon’ has become a well-known reference term in popular culture to signal the oppressive system.”

Listening skills
Adds Maria, “The second element in the title, ‘broadcasting’, refers to the public and dialogic nature of our entire programme. This block is about relating to, learning about and being in dialogue with people, histories and situations. For us, broadcasting is explicitly not a one-way sending. Listening is central to the idea of broadcasting for us. Usually, however, listening is not taken seriously. It is seen as something passive, and is not considered to be a skill, practice or activity. During the block programme, we will put a lot of emphasis on listening as a deliberate, active and even political skill. Empathetic listening and political listening are skills that can be trained. In this era of radically polarized societies, listening and empathetic skills are of fundamental necessity – they enable us to translate between different groups, to bridge differences.”

“Thus we also move away from the classical Western concept of broadcasting, which entails a central sender and author”, says Amal. “If you look for instance at various African cultures, there is no call without a respondent. We include and value those who are present when something is being broadcast. We consider listening to be an active contribution to the conversation.”

Engage with society
Why did the curators create this programme? “We can state that very clearly”, answers Maria: “To think about what an anti-fascist and anti-racist cultural practice is in these neo-fascist times. What does that practice look like? This is also why the programme has to be carried out in public. It is a societal question. You cannot engage with the question of an anti-fascist and anti-racist practice in seclusion, withdrawn from society.”

Amal elaborates, “As an artist you need to situate your own practice in what is currently happening. By placing yourself in a vacuum, you isolate yourself from the realities of society and your audience. Engaging with the audience, taking the public gathering as a starting point, has always been central to our practice and the collaboration between Maria and me.”

New chapter
This is exactly why Silvia Bottiroli chose to invite Maria and Amal in her first year as director of DAS Theatre. “We are starting a new chapter at DAS Theatre. The school has always been attentive to society, the public and the political, but now we need to strengthen this position and engage with the world with a new intensity. Our work as theatre makers and curators practises radical imagination to create alternative realities and other worlds. But these cannot be disconnected from the reality we live in, the world as it is. I think that DAS – as a small artistic community of international people – also has to engage with the context in which we find ourselves: the city of Amsterdam and the Dutch and European societies. We should not be closed off and live in our own bubble. It is important to take responsibility. Our task is to navigate both worlds, the fictional and the real, and see how they can nourish each other.”

Rethink education
Doesn’t the public nature of this programme have an effect on the school as a safe learning environment? Silvia responds, “Of course we want to create a safe learning environment, but shutting ourselves off is not the kind of safety we are looking for. This is why we have chosen a public programme. We took Amal and Maria’s statement about education having to be free and open to everybody as an invitation to rethink and open up at least a part of our programme.”

This is also why the block is happening not just in the school, but also in various locations in Amsterdam, she explains. “It’s a great chance for DAS Theatre to spread out in the city, to work and learn outside of our institute. The interaction with different people and communities is a core element of Broadcasting from Babylon. This is a generative challenge for us, an invitation to rethink education, not in relation to the production of an art work, but in relation to bonding, communalities and relationships that can affect us artists and the world we live in.”

Bearing discomfort
Everyone can participate freely in this block, but there is a special role for the DAS Theatre students, Silvia explains. “They will be going through the whole programme, and will slowly also become the hosts and take over some of the contents.” “In the final week”, adds Amal, “the students will create a programme together based on what they have learned in the previous weeks.”

What do the mentors hope to achieve? “We are very humble about that”, declares Maria. “Decolonial learning is an ongoing process. So it is less about achieving than about opening up the possibility of learning together, having difficult conversations, confronting yourself and dealing with discomfort together.”

“We are really excited about the whole eight-week ride”, says Amal. “I am also happy the gatherings will take place in independent, mostly self-organized and non-institutional spaces across the city. These spaces are slowly being erased – not only in Amsterdam; this is a global phenomenon.” Maria adds, “Of course we are also very curious about what we are going to learn and produce together with the students, the visiting artists and scholars and all the other participants.”