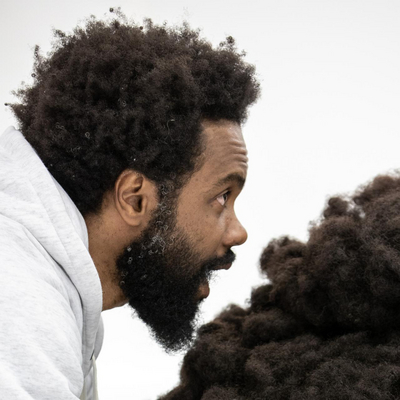 From the periphery of the global capitalism, not young enough, not stablished enough, not black enough (or too much black), not productive enough, not decolonized enough, not queer enough, not radical enough nor contemporary enough, the artistic production of Leandro Souza is structured independently in the city of Sao Paulo, Brazil, usually by establishing numerous partnerships and building groups focused on their shared artistic interests, creating a collaborative itinerant network which supports an ongoing research and production process.

Leandro Souza holds a Bachelor's degree in Dance and a Master's degree in Performing Arts from the State University of Campinas (UNICAMP), Brazil.

Among his works, there is Seisms and Volts (2018), which was awarded by the São Paulo Association of Art Critics (APCA), They Do Contemporary Dance (2019), We Are Subtle, You Are Explicit (2022) and Plataforma Sísmica (2022). His works have been presented in events and festivals such as Fronteiras Festival (Santiago-Chile), FID (Cordoba-Argentina), EINCE (Guadalajara-Mexico), Festival Contemporâneo (São Paulo/SP-Brazil), in the exhibition Histories of the Dances/São Paulo Art Museum(MASP, São Paulo/SP-Brazil), SESC Dance Biennial (Campinas-SP, Brazil).

He also developed curatorial proposals for the English Culture Festival (2018 and 2019) and for the series Pílulas de Dança (Dance Pills) for SESC TV programming. The solo They Do Contemporary Dance (2019) is part of the collection of the Dança Contemporânea program on SESC TV.

As choreographer, Leandro Souza works in the threshold of different languages, moving through different knowledges, sighting different horizons, getting unusual movement approaches, tracking, gathering, and creating tools and strategies for the creation and research of art.

Leandro about his work

The work that I have been developing has been concerned with going through the dynamics involved in the subalterns, racialized, blackened, dissidents of gender, sex and sexuality processes of subjectivation within the western modes of art production. Examining the frictions between representation, perception and the logic of the specific place to which they are relegated to, asking myself what should be the art becoming of the subaltern in an ever colonised and colonising world.

Regarding this, I observe the recurrences of words, speeches, affirmations, images, objects, materialities and sayings as a sort of chorus to a song we are used to sing/perform and that confines our bodies/subjectivities/relations (or contradictorily, we identify and reaffirm them). I am interested in scratching that records to create a cacophony. Seeking to radicalize an expanded thought of choreography, based on the ideas of transit and displacement, focused on the production of opacities, in the oscillation between the subtle and the explicit, focused on the entanglement of materials/things/voices/sayings/objects/beings/bodies/technologies, in scenic syntheses that challenge established categories, capable of inspiring collective and individual emancipatory processes, each in its own way.