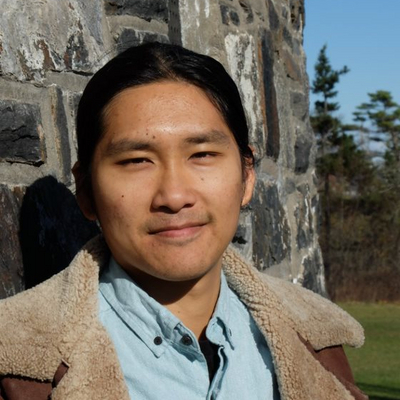 Chun Shing Au (1989/Hong Kong) graduated with honours from The Hong Kong Academy for Performing Arts in 2012. Utilizing his acting background as a springboard- Chun Shing has been working across disciplinary boundaries including scenography, projection design, sculpture, installations and performance since 2017. His solo and collaborative works have been performed and exhibited in Hong Kong, Macau, Ireland, Canada, Germany, and the Czech Republic.

In 2015, Chun Shing and his wife, Carmen, settled in Nova Scotia, Canada, where they formed Theatre du Poulet a theatre company that explores alternative ways to create performances with a commitment to using theatre as an amplifier to illuminate contemporary issues related to the identity in the present multicultural climate of the world.

Chun Shing’s work as the artistic director of Theatre du Poulet helped the company earn two awards in 2018- “The Best Newcomer Award” at the Halifax Fringe Festival and “The Theatre Centre’s Emerging Artist Award” at the Summerworks Festival in Toronto. In 2019, the company was invited by Professor Karyn McCallum from Dalhousie University in Halifax to exhibit their work < 12557km > as a part of the Prague Quadrennial 2019 (student exhibition). Additionally, one of his collaborative works <Be Water, My Friend>, an audience participatory performance, will be present at Prague Quadrennial 2023.