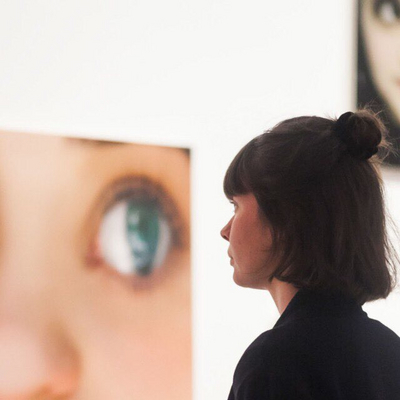 Rebekka Bangerter (1991) is a Swiss theater director based in Zürich / Amsterdam.

She is mostly busy with living in an information rich world.

In her recent work MNESIA, coproduced by Gessnerallee Zürich, she is investigating how the way we look at our past is genuinely changed through digitalisation. The audience is invited to become part of a performative memorial where remembering, commemorating and Historiography becomes tangible and experienceable as a performative act.

Under the impact of Covid 19 she discovered her affinity for online theatre. Her digital performances „attempts on your body (by the anonymous screen in front of you)“ explores virtual violence and the relation between the physical and digital realm.

In her ongoing research project „teidla tier a mi“ she combines linguistic with artistic practices, by investigating endangered languages and asks what gets lost when a language gets lost.

Her work explores modes of representation, presentation, imagination and image building and often explores the theatrical machine as such.The physical presence of the audience itself stands at the core of her interest.

Inspired by the concept of Realismo Magico as well as by post-internet theories she aims to interweave poetic, scientific, algorithmic, historical, and personal perspectives of narrating world, in order to create a multilayered and hybrid vision of reality, that is in a constant state of negotiation.

At DAS Theater she wants to continue researching on performativity of language and how hypermedialization and digitalisation shift our perception and understanding of reality and our modes of behaviour.

Rebekka Bangerter studied directing at ZHdK in Zürich, where she has also worked as a guest teacher, at UNA in Buenos Aires (with specification in New Medias, Object theatre and Performance). She holds a bachelor degree in German Literature and History from the University of Basel.