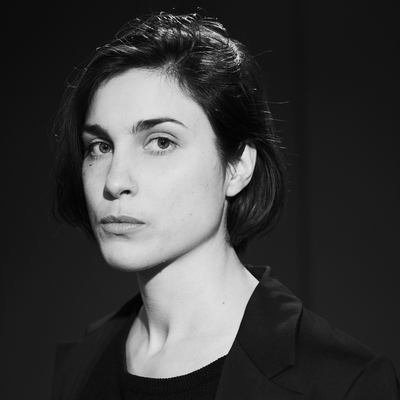 Isadora Tomasi (Italy 1987, currently based in Amsterdam) is a performance and sound artist. She graduated from the Mime Opleiding at the AHK in 2015 after being educated in text theatre in France. She is currently studying at DAS Theatre, Master in Performing Arts in Amsterdam. Her work often reflects on philosophical topics and situations of inequality, navigating life from a female perspective. She researches how to include elements of a concert in her pieces and vice versa, using both performance and music as equal means of expression.

As a maker she created RHEA (2014) which was shown at the Van Gogh Museum, Frascati Theatre, BrakkeGrond, Zaal100 and created W3 - tributes (2017) for CALA Festival, later showed at Veem Huis Voor Performance. She collaborated with Moa Holgersson for the making of YOU TELL ME at the New Adventures Residency program at Dansmakers in 2018. She performed in collaboration with Giulio D’Anna, Fernando Belfiore, Nicole Beutler, Wild Vlees, Riccardo Guratti, Golden Palace, Khalil Joreige and Joana Hadjithomas. As sound designer she worked together with Fernando Belfiore, SonOfMom, Riccardo Guratti Charlie Laban Trier and Andreas Hannes. As sound technician she worked with Florentina Holtzinger, Annina Lara Maria Machaz and Esther Arribas. As composer she had concerts, among others, at the Amsterdam Dance Event, Subbacultcha Amsterdam and Argo16 in Venice. She recently released a new EP under the artist name YKA.