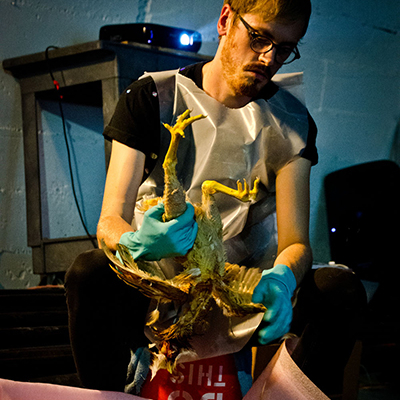 My artistic practice centers on dramaturgies of participation within the live performance event; with a specific focus on social choreographies, queering representations of the dancing body and live art protocols, with an aim to shift the role of the audience from consumer to mediator of their own experience and the role of the performance from product to container for rupture of the status quo.

Teanga / Language
I am interested in the intersectionality of language and dance, specifically the relationship between my own dancing body and native tongue: Gaeilge. Translation I have found is not always the answer, neither is obedience to form and context. We are trying to consider the potential or opportunity in creating a space for something else. Language, like dance, is as much about emotion as it is about 'meaning making’.
‘Tír gan teanga, is tír gan anam’ - Pádraig Mac Piarais

Corp / Body
What is a nation? Where is capital? What is a political theatre?
What does active resistance look like?
There is an ‘other’ out there - we dream ourselves into being.
Are we willing to risk an impossible dance, one that out-muscles exhaustion?
Currently placing acupuncture needles on the social body and making ritual objects for a tribe which doesn’t exist. Object orientated.

Bio
Ruairí Donovan (Ireland, 1985) has been making dances since 2008. He splits his time between Ireland and various haunts on mainland Europe. His work has been presented internationally, receiving critical acclaim, with organizations including: SummerWorks Toronto, CounterPulse San Francisco, New York Live Arts, Project Arts Centre Dublin, Chapter Cardiff, HAU Berlin, TanzHaus Zurich, Zodiak Helsinki etc.  He has collaborated with/alongside Cathy Walsh, Asaf Aharonson, Siriol Joyner, Jassem Hindi and Mica Sigourney among others; and he has performed for THEATREclub, Mårten Spångberg as well as also touring with Keith Hennessy; TURBULENCE (a dance about the economy) since 2011. He recently performed a solo dance for 30,000 people with Arcade Fire.