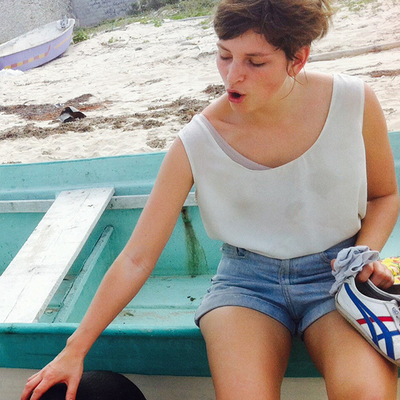 Erin Hill is from Montreal and works in dance as a choreographer, performer, and collaborator. Her work gathers a multiplicity of mediums under the name of dance, attempting, via embodiment, to arouse a polyphony of the senses and a noticing of this event. In her search and research Erin is most curious about creating and tuning into spaces of communal somativity. She sees dance as a possible practice of redirecting forces and performance events as a place to notice the creative filter that is our senses.

She received her BFA from Concordia University in 2014, during which she studied abroad at the Norwegian Theatre Academy. Alongside her own creations, Erin works as a curator for the longstanding Montreal puppetry event, ‘Café Concret’, and collaborates with Montreal-based choreographers.

Erin's most recent work, Radio Project, utilised the radio as its medium, concept and content, a performance that tuned into the omnipresence of radio waves, attempting to render the invisible visible. After being performed as a duet (Studio 303; SummerWorks Festival), as a solo (Festival Phenomena), and as a quartet (Movement Research at the Judson Church), it then became a monthly radio show on CKUT in Montreal. Erin is still looking into what else the radio is, and what it can do.

Erin currently collaborates with theatre director Jana Vetten under the name ‘Local Business’. Since 2014, they have been developing Dreampath, a solo score-based walking and storytelling performance that invites the participant-performer to hallucinate from the real an alternate space. Erin now lives in Amsterdam, and is enjoying this new landscape for Dreampath-ing.