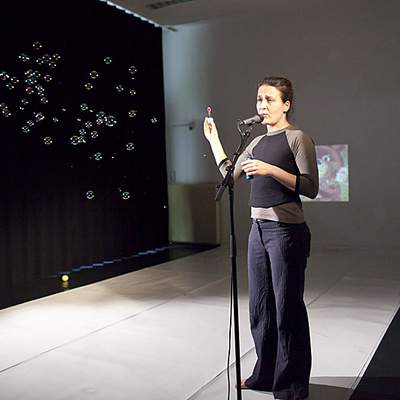 Nadia Tsulukidze (GE) studied music first, and then dance in Germany. Before coming to DasArts, she already took part in international projects and exhibitions. In her Master Proof, the documentary theatre piece ‘‘Ready for Love or Seven Fragments of Identity”, Nadia linked political events in the Sovjet Union to her personal life, exploring the format of lecture performance, involving movement, text and video. This piece was selected for the NEU/NOW festival. After DasArts, Nadia developed herself as an artist who takes time to prepare her projects and find partnerships, next to working as an advisor and collaborator with other artists. She found a base in Amsterdam. In a recent performance called “Me & Stalin”, Nadia elaborates on power mechanisms and political art, through images, songs, dance and stories. This performance was partly supported by and presented at Festival Belluard Bollwerk International  (Fribourg), Kaaitheater (Brussels), Frascati Theater (Amsterdam) and Schlachthaus (Bern). Nadia also gives lectures and workshops, in Georgia and at ArtEZ (Arnhem).