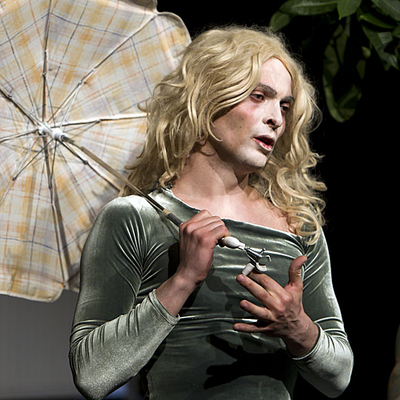 Ivo Dimchev (BG) already worked as a choreographer and performer. At DasArts, he further developed his dramaturgical practice, in which he critically and politically questions the functioning of the art world. As the informal instigator of a new movement in performance art, his work does evoke controversy but it is also well established. Ivo has presented his work in Europe and North America and his performances were nominated repeatedly for best performance of the year in France, Holland and the USA. His works are usually coproduced by Kaaitheater (Brussels), Frascati (Amsterdam), ImPulsTanz (Vienna), HAU (Berlin), Künstlerhaus Mousonturm (Frankfurt) and Centre Pompidou (Paris). Ivo regularly gives workshops and master classes, for example at the National theater academy (Budapest), the Royal Dance Conservatorium of Belgium (Antwerp), and the Hochschule der Künste (Bern). Furthermore, Ivo has his own workspace in Brussels, Volksroom, where he presents young international artists. Since 2013, he is artist in residence at Kaaitheater (Brussels). In 2014 he moved to Bulgaria and opened a new space for contemporary visual art and music in Sofia – MOZEI Gallery