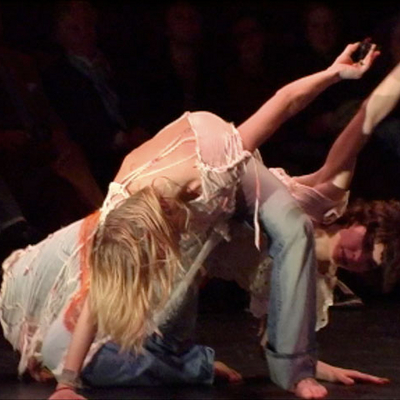 Nicola Balhuizen Hepp graduated from the Modern Dance department of the Theaterschool in Amsterdam in 1999. Since then she has worked primarily as a teacher and choreographer basing herself in the Netherlands. Her interest in combining projected images with movement in live performance brought her to pursue a postgraduate degree at Dance Unlimited. During this time, apart from investigating media in relation to movement, she researched and questioned her own approaches to creating work and the results that it delivered. She has become increasingly interested in non-conventional approaches to the audience. As part of her studies, Nicola created choreographies for non-traditional viewing and set up experiments to find out more about how to interact with the spectators.

Her choreographies have been presented at venues and festivals in the Netherlands, Belgium and Sweden. She is on the teaching staff for the Preparatory course of the National Ballet Academy and the Dance Teacher's programme of the Theaterschool Amsterdam.

‘Sarah’ (2004)
Research into combining live and pre-recorded movement, using the software-program ‘Isadora’. The images, body parts of the performer, Sarah Dillen, were shown on a monitor and on a screen.
Studio presentations in Dance Unlimited studio

‘Close’ (2005)
‘Close’ was a research project created in collaboration with Anne Parlevliet, Anne Gentenaar, Sarah Dillen and Ailed Izurieta. The intention was to find out how the conditions could influence the choices and actions of the audience. In ‘Close’, there is no performance, nothing to look at. On entering the darkened space, the audience get strapped into a harness and connected to each other by a single, circular rope.  The audience members participate and become the performers, creating an instant choreography by their own movements.

Close 1. [a] near in space or time or relationship
Synonyms: near, enveloping, intimate
2. [v] come together, as if in an embrace
Synonyms: come together See also: move

Move [n] the act of changing location from one place to another
Synonyms: motion, movement

(game) a player’s turn to move a piece or take some other permitted action
see also: play

‘Inbetween’ (2005)
This piece involved live, handheld wireless cameras and the software-program ‘Isadora’. Collaboration with Anne Parlevliet (sound), Andrea Bozic (video) and dancers Rikke Baewert and Isabel Ollé Carpintero. The performers used the camera capturing images of each other and the audience while dancing.
‘Inbetween’ was performed at the Melkweg Theater in Amsterdam and as a shorter version in the Theaterschool Amsterdam.

‘23| 73’ (2006)
23 | 73 is an installation/performance where the audience can walk around freely in the space. Two male performers, one in his twenties and the other in his seventies dance, each on his own side of the large screen that divides the room. Images of the performers are projected onto the screen. Music by Anne Parlevliet, video by Coordt Linke and Chris Fawcett. Lights by Katinka Marac. Performers: Aimar Pérez Gali and Rolf Hepp.
Performed at Theaterschool Amsterdam