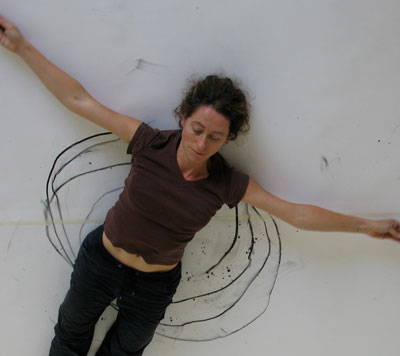 Katrina is a choreographer/movement artist based in Amsterdam. Shifting between performative actions, installation, workshops, research periods, she has been working with action/trace, movement/material, absence/presence, surface, memory and time.
Katrina completed a masters research programme 2006 in choreography and new media at Dance Unlimited/Theaterschool Amsterdam, where she researched the dialogues between movement and drawing. Through residencies in Dartington College and L’Animal a l’Esquena, Catalonia, she has explored the idea of the page/frame and the translation of body, movement, gravity into a ‘book’; Within this research, she also worked with groups of children in UK, Catalonia and Holland. Her performance with 2-4 year olds has been touring Europe 2008-09. In November 2008, she began a project with her son at the Centro Coreografico de la Gomera in November 2008, on situations of (in)equality.

Katrina about her work:
‘The dialogue between drawing and moving has led me into a series of studies, thoughts, essays, collaborations and performance situations. During my time at Dance Unlimited, I originally started off wanting to learn about animation and new media as a way to bring my drawing practice and my moving practice together. Instead I was mostly working with paper, chalk, charcoal...old media in new contexts. Fascinated with 'trace', and the process of movement becoming material, I was able to re-contextualize and re-articulate the notions of surface, gravity, place, body, travel, space and memory.’

Moving/Drawing website (2006)
This was Katrina’s final project at Dance Unlimited. She wanted to document the language she had developed during her research of moving and drawing. At the same time this document became an experiment in itself as a new form of presentation of her work to a wider audience.
katrinabrown.net/moving_drawing

‘An essay that folds into a memory of walking on chalk paths’
The text takes us along on a journey, using her actual, physical walk along the cliffs of Dorset to reflect on time and memory. Katrina writes about the influence of Henri Bergson on her thinking and continues to make a link to the work of Landart artist Richard Long.
Download the essay (PDF)