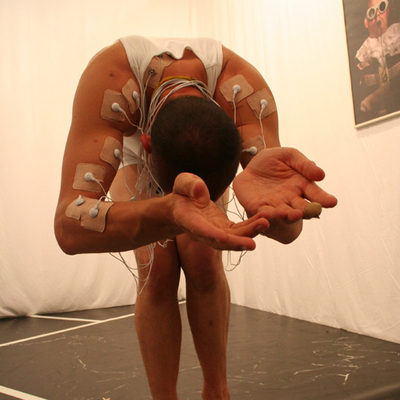 Since 2000, while continuously relocating between Salzburg, Dresden and Amsterdam he developed several performance and installation pieces using dance and technology. As a maker he guided many interdisciplinary projects bringing together artists from dance, digital music, architecture, theatre and visual art. His recent projects have been presented at ICA London, Cynetart Festival Dresden, Melkweg Amsterdam and others. He currently travels through Europe, while giving lectures, working on projects and teaching workshops, all in the realms of dance, performance and realtime media. Since 2006 he is a visiting director at the Royal Academy for Music and Drama in Glasgow.

Georg about his work:‘While the idea of instant composition and emergent improvisational systems formed my interest in movement and contemporary dance, digital technology enabled the tool that solidified my understanding of dance as a system. My practice as a performance artist began when I started to merge both of these principles in an attempt to emancipate myself from a conventional theatre origin as a conservatoire trained actor. It became obvious, that working with technology often leads to a reverberation of the technology’s attributes in the physicality of the performer. Bored by the limitations of interactivity and irritated by the omnipresent narratives surrounding the extension of bodies (after McLuhan), I became interested in technologies and concepts that invade and compromise dance systems, free will, the idea of choice, expression, emotion and the human body itself. Departing from a quasi-utopian technological understanding, I became interested in inhibiting dance to explore different pathways, patterns and ways of moving that are rarely visited by the conventions of contemporary dance.’

‘Technuition’ (2005)
A non-systematical approach towards shifting focus and devising with media. In this work Georg experimented extensively on emerging choreographical principles when confronting the moving body with a playful setup of real time video. Rather than imposing a choreography from a conceptual point, the movement evolved out of the visceral encounter of body and image. This work is still being continued in Georg's research projects REC and DoubleContigency. Created in collaboration with Malgorzata Haduch. Studio presentation in Dance Unlimited Studio.

‘We only do’ (2005/2006)
A dance performance in collaboration with Depart and dancers
Quoting Depart:
“eyeconed woeshoeshine,
choreogenetics and stagedicing,
3Dancers on their way to form,
plus veni vidi audi....”

'Remote Controllmodelled'
A lecture-performance continuing the work with the electrostimulationsystem Georg also used in ‘My Myo Mayhem’. The text is about the body of work of the collective Senselabor, in which Georg takes part. During the lecture-performance, the audience was able to control the performer’s left arm while he was speaking. This added another layer to the text, affecting both it and the performer and was at times simply hilarious.
Download Remote Controllmodelled (PDF)