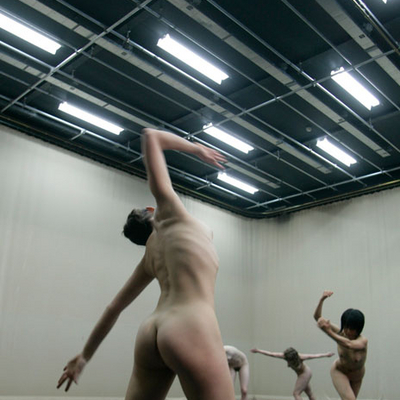 Amsterdam-based dancer, choreographer and movement practitioner. Her teaching and choreography draws from a range of movement approaches: Chi Kung, Post Modern Dance Technique, Improvisation, Yoga, Body Mind Centering, Alexander Technique, Sensory Research and Structural Integration. In New York City, 1994 she founded CompanyAmyCox, an organization formed to research and develop her movement practices and choreographic projects.
She staged over 20 works in New York City over the course of 10 years, and was presented at venues such as The Kitchen, Dance Theatre Workshop and Joyce SoHo. Her move to Amsterdam in 2004 brought a significant change in Cox’s work, mainly how the body and movement were being represented on stage and experienced by the audience. Two years of post-graduate research at Dance Unlimited in Amsterdam moved her work into the realm of new technology. In the Netherlands CompanyAmyCox has received support from Fonds Amateurkunst Podiumkunsten, Den Haag, Amsterdams Fonds voor de Kunst, Amsterdam and Thuiskopie Fonds. She has shown her work at The Melkweg Theater in 2005 and 2007. Amy Cox has recently founded The Movement Practice, a company that fuses teaching with her sensory research and performance practices.

‘Hunters and Gatherers’ (2004)
Studio presentations at the Theaterschool Amsterdam

‘Metrics of Mind’ (2005)
“I’m not what you think, I’m your enemy in time, a thought I unravel the metrics of mind”  (unsung lyric by Amy Cox)
The concept behind ‘Metrics of Mind’ was to amplify the experience of a moving body by combining dance with sculptures that produce sound when moved or touched. This kinetic and sonic installation/performance was co-created by Amy Cox and sound artist Edo Paulus. In the performance, a hanging speaker built out of pentagons, a sensitive steel floor built out of hexagons, and a hanging microphone built out of heptagons together create an aurally and kinesthetically receptive environment. Already a sonically live ecology, a solo performer visits the installation, acting not as a musician, but as an inhabitant who both triggers and responds to the system. During the performance audience members are invited to listen as much as watch.
Performed at the Theaterschool Amsterdam in 2005 and reworked and shown at the Melkweg Theater in Amsterdam later the same year and at the ArtEZ Hogeschool voor de Kunsten in Arnhem in 2006.

‘Not the Real Very End’ (2006)
‘Not The Real Very End’ is a performance built on relations between light, movement and feeling. An LED light sculpture and TLD overhead lamps provide a minimalist stage for a work that assimilates ‘processes which finish’ with ‘impressions that continue’.
Performance/Choreography: Kyung-sun Baek, Amy Cox, Maria Mavridou, and Maija R. Raumanni
Light Sculpture: Eric Singer
Light Dramaturgy: Katinka Marac
Direction/Concept: Amy Cox
Performed at the Theaterschool Amsterdam with kind support of the Philips Company