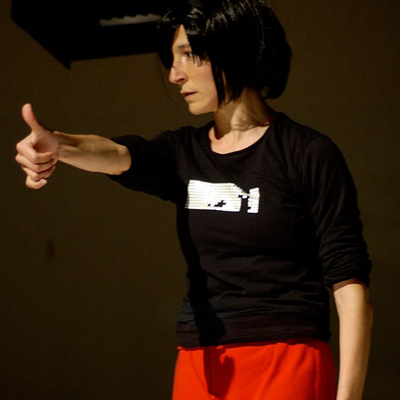 Maria Ines Villasmil was born in Venezuela (South America). After a career as a sociologist she moved to Holland in 1996 to further pursue her dance studies. In 1999 she received a BA as Performing Dance Artist from the School for New Dance Development (SNDO) of the Amsterdam School of the Arts.  In 1998, together with Manuel Perez Torres she formed Dual Dance Project DDP as an independent artistic association, to continue developing their choreographic ideas.

From 1999 to 2003, she was travelling between Canada and Holland working as a dancer and collaborator for Flak Dance Company, directed by Jose Navas. Since 2003 Maria is part of the staff of teachers of the Amsterdam Theatre School, where she works for the School of New Dance Development (SNDO), the Modern Theatre Dance department and the Dance Teacher department. As a freelance teacher and choreographer she mostly works in Latin-American countries, Holland and recently at the PSU (Prishtina Summer University) at UNMIK (Kosovo). In July 2004, Maria received her master degree in Choreography and New Media - Dance Unlimited- at the Amsterdam School of the Arts.

‘In Vitro’ (2002)
Performed at Gaudeamus Music Festival, Monaco Dance Forum, Festival Jovenes Coreografos, Caracas, Venezuela.
For this project, Maria was working with the body as an instrument, having specific "movement memories" and being by itself a "body-instrument" that can create, call and re-call specific "sound-memories" live. The sound landscape was created through the use of contact-microphones (manipulating samples through pitch), a sensor system (‘BodySynth’) and the positioning of the dancer on the stage (used as a reference image for the computer). In collaboration with Daniel Schorno, Jorge Isaac. With the support of the AFK and STEIM foundation.

‘Vanish Carmin’ (2003)
Presented at Theaterschool Amsterdam
‘Vanish Carmin’ was created as a reaction to a workshop given at Dance Unlimited by Tere O’Connor in which he encouraged Maria to keep developing the preliminary ideas. The structure of the book ‘Fires’ by Marguerite Yourcenar gave a major impulse to the piece. Another question that inspired the project was related to love as a physical event. Is love a discourse? A painful or pleasurable feeling that is physically placed in the chest? What kinds of connotations does the colour red have, as the colour that everybody uses for visualizing love or suffering?
The piece used the voice and breath of the performers as a “sound” input, which through the use of several electronic devices created a live sound environment with the use of the software programmes Imagine and Lisa. In collaboration with David Stout, Daniel Schorno, Ailed Izurieta and Hellen Grogan.

‘Recog’ (2004)
Performed at Theaterschool Amsterdam
‘Recog’ was a research project into a “sensitive stage”, a stage that possesses the intelligence to interact with a dancer. In ‘Recog’, Maria investigated the possibilities of an interactive play between dance/choreography, sound/music and light, in which hi- tech devices were used such as a motion tracking system, a voice recognition system and innovative software for sound and light processing.
Her interest lay in the creation of a theatrical space, in which computing was used to enhance physicality. Movement lead to a process in which physicality engaged in a mediated relationship with specific aspects of the architecture of the space, such as sound and light. The sensitive stage was the transformation of the concept of the intelligent room, as developed in architecture, to the theatre space and it was an attempt to create a sensitive space with it’s own identity. In collaboration with Ivo Bol, Katinka Marac, Rui Dias, Kirk Woolford, Irena Mikec. With the support of STEIM  foundation.

Cd-Rom (2004)‘Self- Instruction for learning basis of Choreography’The project consisted of a Cd-Rom showing some guidelines for the construction and manipulation of movement vocabulary in Maria’s work. It was a pedagogical tool to support the teaching of composition with the goal of accelerating the process of understanding certain basic choreographic devices.In collaboration with Benjamin Scheer, Ivo Bol, Irena Mikec.WebsiteAbout her piece ‘Recog’: www.katinkamarac.com