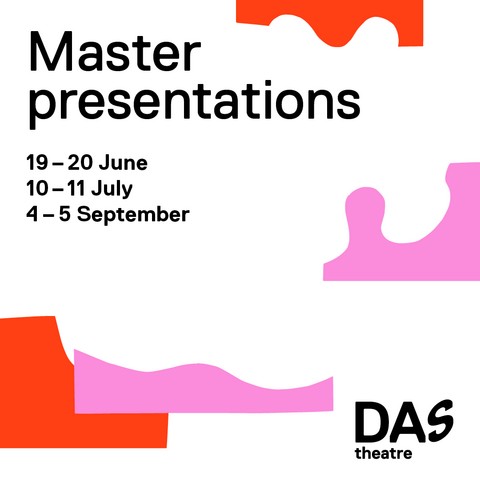 Artists and curators working in the field of performing arts will share their work with you at the conclusion of an intensive two-year period of master’s research at DAS Theatre, part of DAS Graduate School.

Due to the current circumstances, the DAS Theatre Master presentations will not be presented in their usual form, but in three different chapters, taking place at different times: 19-20 June, 10-11 July and 4-5 September.

HOW TO START A MOVEMENT - Merel Smitt

HOW TO START A MOVEMENT is a series of interventions and missions in which different individuals get the opportunity to explore, question and disrupt the protocols, dynamics and rules of (semi) public spaces, institutions and venues. The missions consist of instructions you receive and execute together or individually. You can receive these instructions through printed cards, digital channels, verbally and so on. Some of the missions are role playing games with specific roles and instructions, others are workshops, multi-interpretable assignments or instructions you can do on your own whenever you feel the need to raise your voice or respond to the harsh reality. With some you need to be physically present, others you can do from your home using the internet, your telephone or non-electronic mail. By creating different types of missions with different threshold levels it is possible for everybody to join the movement at some point to take back their power, claim their voice, and empower themselves by setting something in motion.

Merel Smitt is an artist based in Rotterdam. She builds immersive installations and creates interventions in the public space that interfere with our daily lives. Her work is research based, site-specific and the audience, knowingly and unknowingly, participate in various ways. You may come across one of her projects in situations or settings where you don’t expect art to happen.

Her projects often result in multiple outcomes that can be seen together as a whole but can also be experienced separately. The output consists of installations, websites, fictional campaigns, score-books, audio-tours, walks, role playing games and so on. The impact of the work lies within the participants; they become aware of the way certain frameworks produced by political and social systems in our society influence our environment, behaviour and interactions. Her projects can be seen as methodologies to rethink protests and social movements, occupy spaces, raise voices, and set something in motion.

The conclusion of HOW TO START A MOVEMENT takes place on June 19th in a private online gathering, where all 45 participants share their experience with the project.

The trip to the whole castle | Jãnis Balodis

The trip to the whole castle by Jānis Balodis, an online 2020 DAS Theatre Master Presentation, will be live-streamed from Riga, Latvia on Saturday June 20th at 22:00 CET. Click here and tune in.

The trip to the whole castle is a work that shifts its form and content in relation to the space and context within which it takes place. This feels like an absolute necessity in order for ‘a journey to occur’. The one and only thing that stays the same is a desire to go and find a castle, and to let the mysterious girl from the past help.

Jānis Balodis was born in a country that doesn’t exist anymore, and, can still see and feel its aftermath in many ways, either back home in Riga or here in Amsterdam. Jānis is interest­ed in seeing and perceiving reality as hundreds of layers of the past, present and possible future that exist here and now, all at the same time.

Last September, Jimmy Grima started his research on human­made earthquakes. It was envisioned to be a live act with a cast of actors, singers, a choir, live music, visuals... ­ a collective listening experience for an audience in a theatre venue. Then, the collective experience could no longer happen. Over months of quarantine, they, the Kerogen Voices, stayed hand­-in-­hand with the artwork. They tried to imagine the soundtrack of an unfinished performance. They worked on text and music, recorded their voices on different devices, from different cities and continents, stuck in their homes, or bound to singing under a bridge. Now, they would like to share the SOUND of Kerogen Voices (55 minutes) with you on July 10th. The radio play will be available between 20:00 - 22:00 CET at https://www.kerogenvoices.club/

Jimmy is an artist-curator. His trans-disciplinary practice is involved with the politics of memory and archiving. He is particularly interested in the disappearance of local knowledge and has an affinity for the relations between humans and nature. Between 2015-2017 he directed the Windrose Project, a multiple-site community-led research project harvesting local knowledge on winds. Song of a Bird (2018-ongoing) is a live archive documenting the collaboration with the microcosm of nature enthusiasts who can sing and call like migratory birds: the Maltese bird-trappers. Jimmy is the founder of the rubberbodies collective (2009). Jimmy is based in Amsterdam and is currently a resident at DAS Theatre.

The Time That Remains by Igor Dobričić

Igor Dobričić, studied dramaturgy at the Academy of Dramatic Arts in Belgrade, (former) Yugoslavia. He is working internationally as a dramaturg, collaborating regularly with a number of choreographers/makers (Nicole Beutler, Keren Levi, Guillaume Marie, Christina Ciupke, Alma Söderberg, Arkadi Zaides, Jenny Beyer, Meg Stuart, a/o). In a role of a teacher and a mentor he has a long-term engagement with the Amsterdam School for New Dance (SNDO). From 2010 onwards, he is also developing his own performative research project under the title TableTalks. During the last 10 years TableTalks is hosted and presented in Amsterdam, Berlin, Stockholm, Cairo, Sao Paulo and Vienna.

After months marked by the ubiquitous feeling of uncertainty, Maria Magdalena Kozłowska's experimental noir opera and murder mystery titled She dies for you will premiere as a video work. Join the operatic video and discover what happens to the body on the edge of the cinematic and the theatrical: on screen, the ultimate space for projections.

Maria Magdalena Kozłowska was born in Zielona Góra, Poland. She's a director, performer, singer and writer. Her directorial debut at 15 years old was staging de Sade's Misfortunes of Virtue in the community theatre. She graduated from the College of In-ter-area Individual Studies in the Humanities and Social Sciences at the University of Warsaw, majoring in philosophy and linguistics. During her studies she developed a practice around video and performance. Her work was presented by Ujazdowski Centre for Contemporary Art, MoMA Warsaw, KW Institute for Contemporary Art in Berlin, Eu-ropean Cultural Foundation, Belluard Bollwerk Festival. As a performer and singer, she appeared in theatre and dance pieces by Alex Baczyński-Jenkins, Marta Ziółek and Oliver Zahn, among others. Despite the interdisciplinary character of her work, theatre was always at the core of her practice. She works with the entanglement of music and language. During her studies at DAS Theatre she has cultivated her interest in non-normative female voices. She investigates dramatic elements in the mundane, and mundanity in the sublime.

In betweeness by Akram Assam

Akram Assam studied theater directing and performing at the Institute of Fine Arts in Baghdad and at the Academy of Fine Arts Department of Theater at the University of Baghdad. Since then, he has been working as a director and performer in the field of theater. He developed his work at DAS. About memory between two regions in the world (regions suffering from wars and safe areas), and how wars and violence affect changing human senses.

Nahuel Cano was born in Neuquén, Patagonia Argentina, in 1982. He lives and works between Buenos Aires and Amsterdam. He is an actor, director, and performer. As an actor, he worked both in cinema and theatre with renowned directors like Lucrecia Martel, Lotte van Der Berg and Alejandro Tantanián among others. From 2010 until 2018, as a maker Nahuel developed his artistic projects together with his group “El Cuarto”, these works have been presented in important festivals and have received support and awards from national and international institutions. His field of artistic action is mobile, exploring the possibilities of performance, installation, cinema, and theatre. Nahuel is a founding member of Escena Política, an artistic and political collective that has organized actions, forums, performances, and protests.