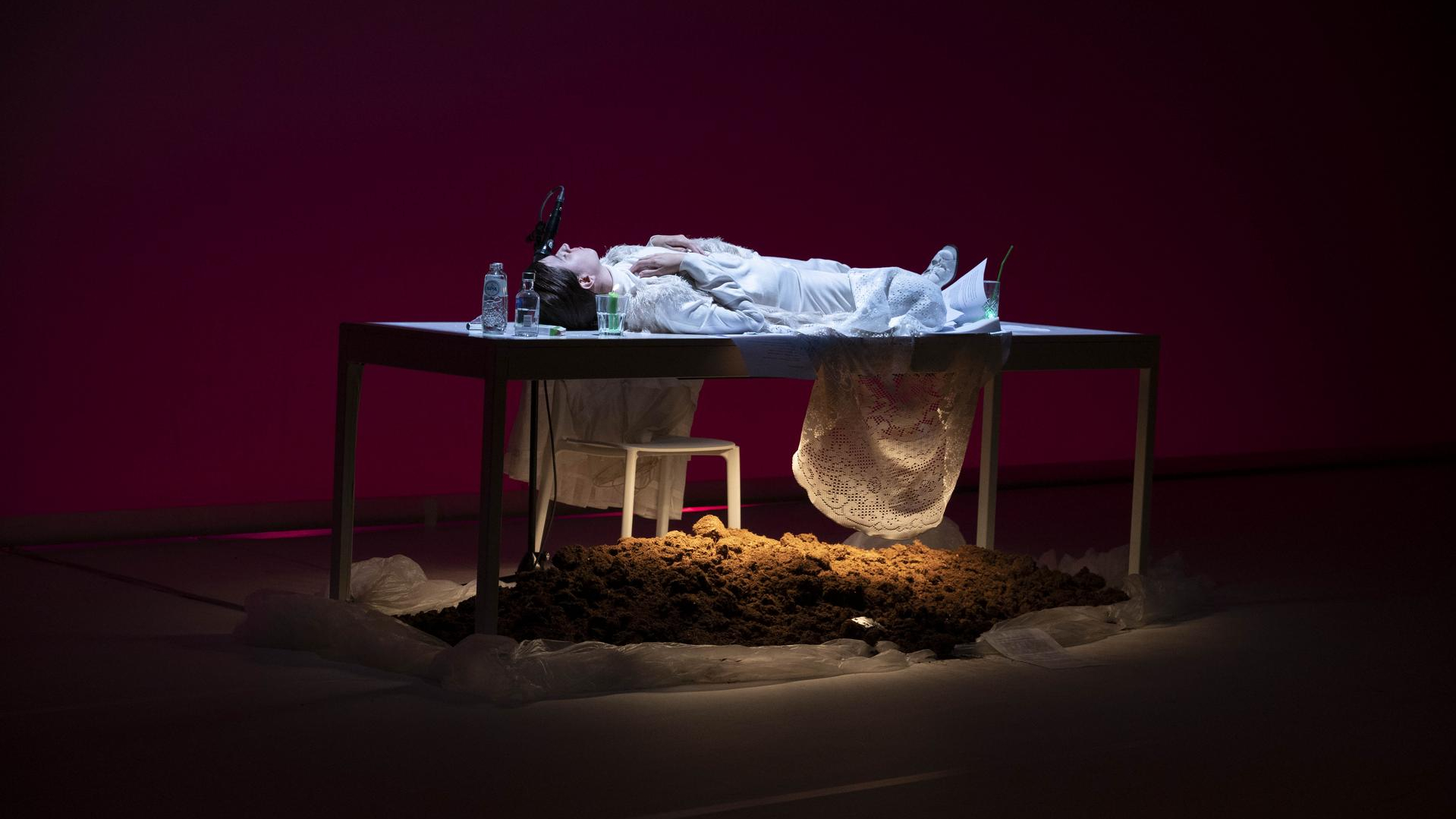 CADELA FORÇA (Portuguese for “Bitch Strength''), is a five chapter play that approaches the histories of femicides that have happened in different places in the world, taking as a time frame the 90’s until now. The word femicide is a very recent legal term to classify the murders of women committed because of their gender, that is, the victim is killed for being a woman.

Assuming that femicide is also a consequence of a communication system between male collectives performing masculinity, the theatre maker, dramaturg and performer Carolina Bianchi (Brazil) creates in each chapter a specific methodology for the approximation of these stories that comes from different theatre tools.

The project will premiere in 2023, so on the occasion of the

Master Presentation at DAS Theatre- Amsterdam, Carolina Bianchi and the Brazilian collective of artists who work with her – Cara de Cavalo,  coming from Brazil especially for the occasion – will share the first and second chapters of Cadela Força.

Both chapters will be presented in sequence.

Chapter 1- The bride and the goodnight Cinderella (approx. 50 min)

Carolina Bianchi opens the piece with a performance lecture, in which she tells us her inevitable approach to the universe of performance art as she becomes obsessed with the story of the Italian performer, Pippa Bacca, who was raped and murdered while performing Brides on Tour  in 2008. To share the obsession with this story and her process of mirroring and confronting Pippa Bacca, Carolina decides to put her own body in a performative process of extreme vulnerability: as the lecture goes on, she drinks a *Boa Noite Cinderella (Brazilian name for a date rape drug), the effects take over her body, until she finally falls unconscious at some undefined point.

Chapter 2- A tribute to all things in the world, including those that haven't happened yet  (approx. 60 min)

“How can a narrative embody life and at the same time respect what we cannot know?”

The second chapter is an approach to the cases of the murders of 700 women from 1993 until 2015 in Ciudad Juárez, Mexico.

The Chilean writer Roberto Bolaño and his book 2666 work as an entrance door in this desert full of enigmas. Here, we ask ourselves, what can we imagine beyond the reality of the documentary narrative? The performers of Cara de Cavalo will engage their bodies in a collective experience through sensorial choreographic practices, in an attempt to have other kinds of conversations with the materials that compose the research full of  ‘unsolved cases'.

She founded CARA DE CAVALO in 2016, a collective of artists with whom she created the pieces: O Tremor Magnífico (The Magnificent Tremor) (2020), LOBO (Wolf) (2018), the outdoor performance Quiero hacer el amor (I wanna make love) (2017), and the lecture performance Mata-me de Prazer (Kill me by Pleasure) (2016).

I want to give special thanks to

To my mother Adriana. And my grandmother Isolda.