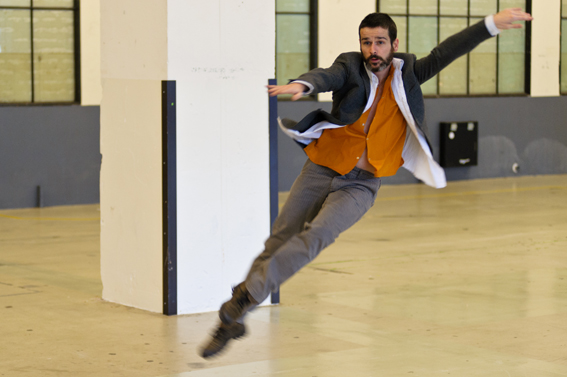 The board of the Prins Bernhard Cultuurfonds Limburg has awarded dancer and choreographer Joost Vrouenraets, graduate of the Jazz- and Musical Dance study programme, the Inspiratieprijs 2012. The prize will be presented on 9 November 2012.

The award consists of cash prize of € 10.000 and a glass objet d’art by the artist Ruth Houkes and will be presented by the chairman of the board – the Royal Commissioner - Th.J.F.M. Bovens in the festival hall of the Gouvernement in Maastricht.

The Prins Bernhard Cultuurfonds will in principle award the prize once a year to a person or organization who has distinguished himself/herself in the field of literature, virtual art, e culture, fine art, music, theatre, dance, history, nature conservation or preservation of monuments.

Joost Vrouenraets
Joost Vrouenraets (Heerlen, 1979), based in Zuid-Limburg with his ensemble GOTRA,  is an internationally recognized choreographer who creates and develops modern, interdisciplinary dance productions. Joost has been dancing since he was eight years old; he studied and worked for years with Maurice Béjart in Switzerland. Now he heads a cast of top dancers and  his  productions have made him an ambassador for the province of Limburg not only in  Holland but also abroad thanks to his global touring. Encountering many different cultures is a source of inspiration for him and he has created an international dance network.
His dance philosophy, enthusiasm and distinct motives make Joost Vrouenraets a fascinating dance artist operating out of Limburg.

His movement vocabulary is characterized by elements which have their source in ballet, the martial arts and theatre. Joost presents himself consciously as a southern activist advocating a “inverse iconoclasm” in a country dominated by Calvinist forms of expression. He calls himself an “urban monk” and as an evocation of his mystic inner world, has named his work “Charlie goes home and the infinite sadness, or the phantasmagorical rollercoaster from earth to heaven”.
Based on this vision, Joost is currently working on the trilogy CHARLIE GOES HOME of which CHARLIE is the first part. A production about contemporary super heroes, it is scheduled to go on tour from December 2012.

CHARLIE GOES HOME will be staged on 17 December in  Theater Bellevue, Amsterdam