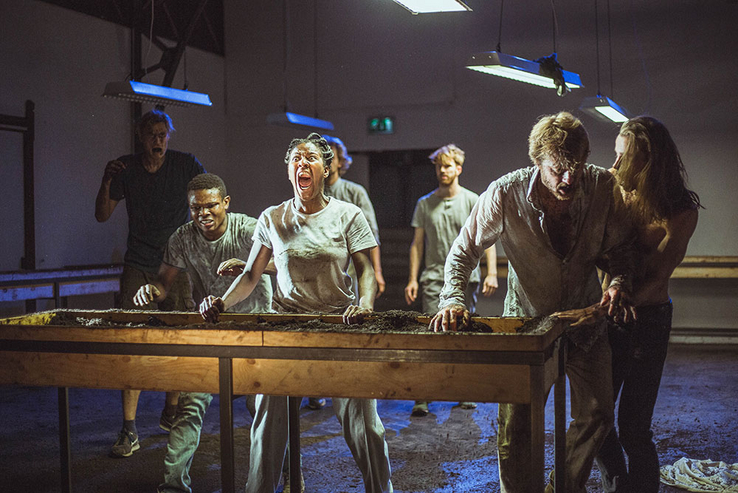 Guests are the former winners:
Jakop Ahlbom (Top Naeff Prize in 1998). Jakop makes physical theater with his own company. His last performance Horror makes international tours and was selected for the Vlaams en Nederlands Theater Festival 2015. Jakop won the VSCD Mime Prize for the performance Lebensraum.
Marijn Graven (André Veltkamp Grant 2017). Marijn graduated last year. She gives her own color to repertoire and draws as a director from a rich source of literature, repertoire, visual art, symbolism and from a spiritual perspective.
Dionne Verwey (Top Naeff Award in 2012). Dionne Verwey makes physical visual theatre, with a tragi-comic taste. As a theater maker, she is concerned with the quest for the universal aspects of man. Dionne is nominated for the Colombina (most impressive female contributing role) for her role in De Blackout of '77 by Orkater / Sir Duke.

With our guests we will talk about their career safter winning the Top Naeff Prize and the André Veltkamp Grant.

You are most welcome at this festive edition of HALf6!
Afterwards there is soup and a drink, followed by the performance Paradijsvertraging in the Theaterzaal. Please note: de performance is sold out!

Location and time
17:30 start HALf6 in de central hall of the academy
19:15 start of Paradijsvertraging in the main theatre at the academy, the performance is sold out
atd.ahk.nl/agenda

The jury about Paradijsvertraging
The jury praises the vitality, diversity, vulnerability and also the strength of this collective. Versatility is an understatement for this group of performers in optima forma: Sue-Ann Bel, Jasper Koopmans, Hali Neto, Len Pillen, Ivar Schutte, Santino Slootweg, Luuk Weers, Vincent van Woerkom. The Mime Graduates 2018 have a 'stubborn mentality, backbone, and a wicked anarchy'. Because the eight men and one woman are looking for protection but are also the paradise re-builders in a bunker on Spitsbergen. Paradijsvertraging directed by Ko van den Bosch works like a cast-iron primeval screaming ritual, as a sound box mirror of present times. The jury will happily see this performance again.