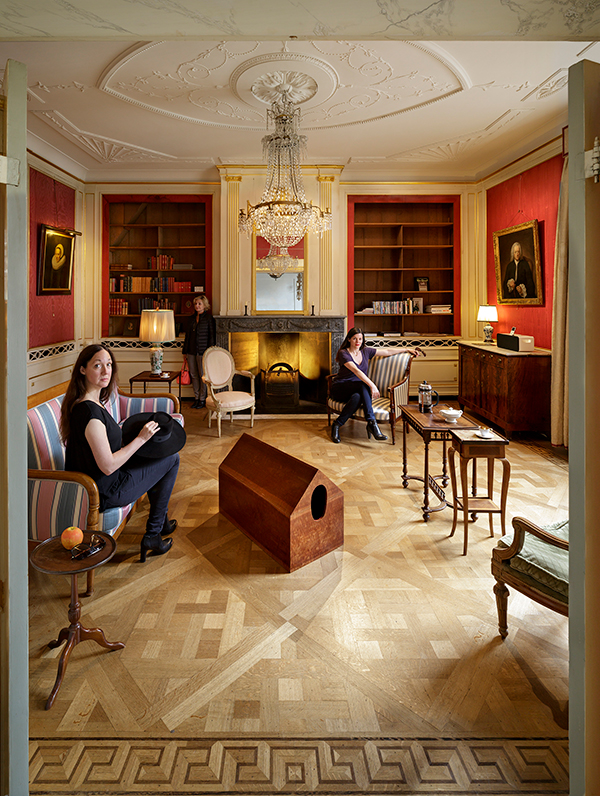 Theaterschool director Jan Zoet has appointed Quirine Racké and Helena Muskens as the creative directors of the long-term venture IDlab, a newly established platform for interdisciplinary collaborations and the latest digital developments. IDlab has been set up to inspire and encourage Theaterschool students to explore new fields.

The IDlab will be home to lectures, events, workshops and projects in which students can learn about the latest developments in the practice of interdisciplinary collaboration and in the digital world. Partnerships and collaborations will be geared towards practice and production, keeping IDlab in touch with the performing arts industry – informing and being informed.

Theatre, visual arts, film and music are becoming ever more intertwined and woven into society. One result is that the arts are becoming increasingly interdisciplinary. Those involved in theatre are right at the heart of society, and contribute to it by moving, enchanting and confounding their audiences – and by posing thought-provoking questions. Increasingly, they will achieve these effects partly through using technology. As well as routinely working with video, theatre practitioners are also making increasing use of new technologies such as motion capture, holographic projections and virtual reality to enhance their audience’s sense of immersion, something so central to the experience of theatre.

In the coming 2016-2017 academic year IDlab will be holding workshops led by theatre director Guy Cassiers, Toneelgroep Amsterdam designer Tal Yarden, and the artist Germaine Kruip. IDlab projects currently under development include ones with choreographer and theatre director Nicole Beutler from nbprojects and theatre makers Suzan Boogaerdt and Bianca van der Schoot from Boogaerdt/Van der Schoot. The IDlab also plans to collaborate with individuals and organisations outside the theatre world. These include the cultural heritage institution the Museum Van Loon, the newly opened A'DAM Tower, the Virtual Reality Studio and the Film Academy’s Research Lab, IDFA’s DocLab and the Centre for Art and Media Karlsruhe (ZKM) in Germany.

About Quirine Racké and Helena Muskens
The artistic team comprising Quirine Racké and Helena Muskens will be working with digital technology across the disciplines. Their work spans theatre and the visual arts as well as film and television. They pioneered the use of video in the theatre of the 1990s, and their video installations and films have been exhibited and screened in museums and at festivals such as the Stedelijk Museum, the Getty Centre in Los Angeles, the Guggenheim Museum Bilbao, the International Film Festival Rotterdam and the New York Film Festival. Their documentaries have been broadcast by TV channels such as VPRO and NTR (Netherlands), SVT (Sweden), ARTE (Germany), ORF (Austria) and the Sundance Channel (USA). Besides creating their own work, something Quirine and Helena love to do – and have often done – is teach. They have guest lectured at the Maastricht Theatre Academy, the Folkwang University of the Arts in Essen, Rietveld Academy’s Department of the Moving Image, and the Dutch Film Academy.