THE LOCAL in 100% Amsterdam (& other works) of Rimini Protokoll 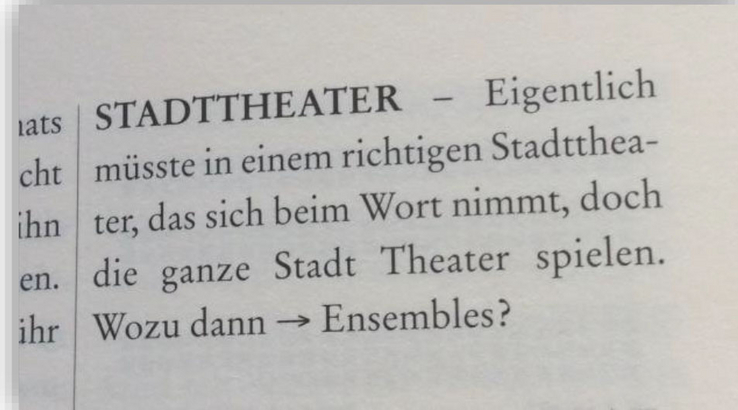 The Berlin based collective Rimini Protokoll will engage in a conversation with professional peers and students on how they work. The conversation with Helgard Haug and Stefan Kaegi will take place in the Stadsschouwburg on 11 December 16.00-18.00h and is moderated by Marijke Hoogenboom.

The Berlin based collective Rimini Protokoll will engage in a conversation with professional peers and students on how they work. The conversation with Helgard Haug and Stefan Kaegi will take place in the Stadsschouwburg on 11 December 16.00-18.00h and is moderated by Marijke Hoogenboom.

Rimini Protokoll is known for their radical documentary theatre that places real people on stage as ‘experts on everyday life’. Now they produce for the first time a performance with and for Amsterdam, presented from 10-13 December in the Stadsschouwburg. The concept has been developed for Berlin and ever since been applied successfully to numerous cities in Europe. 100% Amsterdam takes the city’s official population statistics and pastes a human face on the numbers. One hundred local citizens quasi-scientifically represent each 1% of Amsterdam’s population in a theatrical game of questions and answers, but they also play a more delicate role: that of themselves.

HOW DO THEY WORK? On Thursday 11 December, from 16.00-18 hrs, at the Staddschouwburg Amsterdam, Rimini Protokoll will engage in a conversation with professional peers and students about the concept of 100% City and its legacy throughout Europe, their approach of documentary theater and their work with experts of the everyday and in local contexts.

If you are interested to attend, please mail to info@stichtingpubliekewerken.nl, with your contact details.
The capacity is limited, deadline is 5 December.

People attending this exchange can make use of a special discount of 10 Euro’s for the performance on Wednesday 10 December. Total ticket price will then be 15 Euro’s.

Rimini Protokoll Helgard Haug, Stefan Kaegi and Daniel Wetzel studied at the Institut für Angewandte Theaterwissenschaft in Gießen. They are recognized as being among the leaders and creators of the theatre movement known as ‘Reality Trend’, which has exerted a powerful influence on the contemporary theatre scene. Each project begins with a concrete situation in a specific place and is then developed through an intense exploratory process. Since 2004 Rimini Protokoll is based at Hebbel am Ufer (HAU) in Berlin. They were rewarded many prices for their work, most recently in 2011 the Silver Lion at the 41st Venice Biennale. In 2011-12 they were appointed for the first Poetik-Dozentur of the Universität des Saarlandes. www.rimini-protokoll.de

‘The Local in 100% Amsterdam (and other works)’ is a collaboration between Stichting Publieke Werken / Inge Koks and the Performing Arts in Transition research group / de Theaterschool and a prelude to the joint laboratory ‘On Art, the Local & the City’ in 2015 (date tbc).