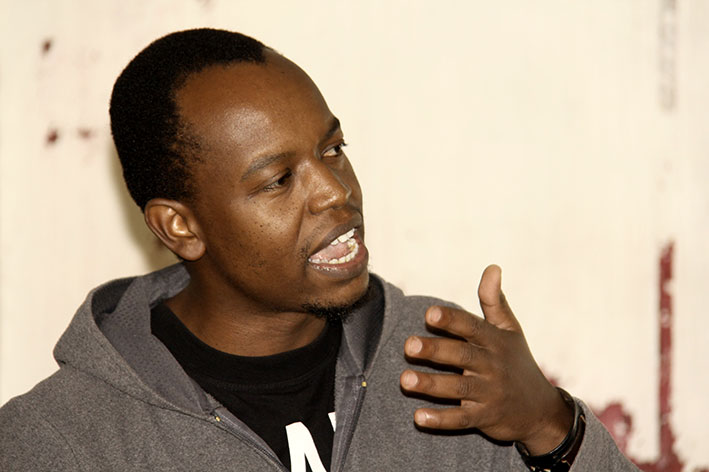 The Kenyan theatre maker Ogutu Muraya is taking part in the introductory weeks for the fall semester at DasArts. “I want to learn about avant-garde and experimental theatre. I come from a classical background, and that is very new to me. At DasArts I can experience it first hand.”

For several weeks this month the Kenyan theatre maker Ogutu Muraya is attending the fall semester at DasArts. The timing is perfect, because the theatre maker, who is in Amsterdam for the exchange programme at ervaardaarhiertheater, aspires to learn more about  experimental theater.

“I want to learn about avant-garde and experimental theatre. That is all very new to me, because I come from a classical background. It is a very different way of working and here at DasArts I can experience it first hand,” explains Muraya. His first introductory weeks have been an intensive and instructive experience. “The programme at DasArts is very focused on the individual; a lot of self-examination and self-questioning. But there is also the aspect of the group and your own position within this safe environment. We go to seminars, performances and events, and I see and hear a lot of things about Amsterdam and the theatre. It is good to contextualize where I am.”

Are We Here Yet?
In addition, as a theatre maker connected with The Theatre Company in Kenia, while at DasArts Muraya wants to go further with the research for his performance Are We Here Yet? During his residency he will be presenting a first concept for his project. With the feedback from this in mind, after this session he will move forward with the development of the production, which arises from the end of the colonial era in Africa about 50 years ago. “My project began with a question. If the freedom fighters, founding fathers and liberators were to wake up today from the death, would they be proud of the country they died fighting for?” Muraya explains.

Ervaardaarhier theater
Muraya is the second artist in residence to attend the educational programme at DasArts for several weeks. In 2012 the actress, director and author Naomi Srikandi (Indonesia) from Teater Garasi was a guest in the masters course. Theatre Garasi has been the recipient of an award from the Prince Claus Fund, 2013.

Under the title Zaaigoed (Sowing Seed), as part of the Ervaardaarhiertheater programme theatermakers from Africa, Asia and Latin America are invited for a period as artist-in-residence or a visitor's programme that is tailored for their personal wishes. Among its other aims, the programme is intended to expand and deepen their artistic knowledge, vision and international network.