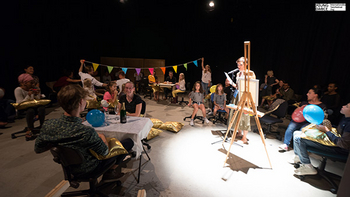 Supporting act:
Cinedans dance film “Competing for Sunlight – Ash" and “Competing for Sunlight – Oak" by Dagmar Dachauer
Starting in the nineties, an Asian fungus has gradually conquered the European continent, infecting almost all ash trees. As a result, it is assumed that the ash tree in Europe will soon be close to extinct. Only 2% are said to be immune. Dagmar Dachauer was inspired by the sad faith of the European Ash tree, and linked it to personal loss in her own life. Finis est cinis: Ash is what remains.

"Inner" - live performance by Masha Zhukova and Liza Zhukova
INNER is about the connection between a human being and nature in total, as well as about searching for the inner-animal which lives in every person, but sometimes we push this animal down, thus loosing the connection with the inner-self.  The idea of the piece originates in deep research of human personality. Before starting working on the creation in the studio Masha and Liza began with studying the ancient horoscopes, and came up with the decision that inside of every person there is an animal living with its own characteristics. By researching the habits, behavior and characteristics of different animals, choreographers transferred these qualities into the physicality. Also, a very important theme for the creators is the connection of a human being to nature. It is about how we tend to forget and loose this connection and about the importance of finding it again.

"Balancing bodies" - live performance by Cie. Woest
In “Balancing Bodies”, both performers and spectators find themselves in an unpredictable space. A theatrical universe full of surprises and unexpected twists, one in which performers invite each spectator to an intimate and revelatory exchange. For Woest, the interplay between performer and spectator is central, the nucleus around which the piece orbits. Balancing Bodies is dynamic, playing with and undermining the codes of theater and lifeand creates a space in which nothing is as it seems. Come and experience it for yourself!