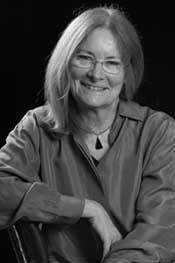 Interview with Krisztina de Châtel
Interviewer to be announced

Hungarian-born choreographer Krisztina de Châtel has made more than 70 choreographies and three dance films. She is driven by a rare urge for innovation, while remaining true to herself. She is open to new cultural developments and frequently seeks to collaborate with other artists. She has also initiated projects with new media and virtual space, skate boys, garbage men, dervishes and various other striking combinations.

Confrontation and struggle
In Krisztina de Châtel’s dance performances two worlds collide as fragile bodies are confronted with natural elements such as wind, earth and water. But there is also a struggle within the body itself as passion and control fight for supremacy.

In the last few years there have been significant shifts in this style and in Krisztina de Châtel’s vision of dance. For while the dancers’ technique and the work’s composition remain important, she reflects on the philosophical implications of the performance: what it says about the Zeitgeist and the world we live in. Krisztina de Châtel’s productions increasingly reflect her views of society.

Advice and support
De Châtel has always wanted to provide opportunities for young creators. The performances of Dansgroep Krisztina de Châtel often included work by guest choreographers, while Krisztina gave workshops, taught in various academies and acted as an artistic advisor. She now pursues this work through the Imperium Foundation (stichting Imperium), which provides artistic and financial support to young choreographers. Read more about the Imperium Foundation.

Prizes
Krisztina de Châtel is the recipient of the Sonja Gaskell Prize and the Choreography Prize of the Dutch Association of Theatre and Music Hall Directors. In recognition of her contribution to the Dutch dance field she was awarded the Prize for a choreographer’s oeuvre by the (2000) Nederlandse Dansdagen and, in 2001 de Châtel was knighted in the royal order of the Nederlandse Leeuw. In 2002 the Circle of Dutch Theatre Reviewers honoured her with the ‘Prijs van de Kritiek’. In December 2008 she received the Frans Banninck Cocq Penning from the city of Amsterdam for her merits as a choreographer in relation to Amsterdam. Also in 2010 she received, during the Dutch Dance Festival, the ‘Gouden Zwaan’ (Golden Swan) for her great contribution to the development of the modern dance in the Netherlands. In 2021 she received the Prize of Merit from the Dansersfonds ’79 for her “quirky, daring, always stunningly clever and intriguing choreographies”.

Pay attention: this interview will be in Dutch

We thank Krisztina de Châtel for her partnership with the festival