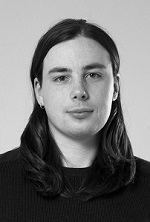 Born in Amsterdam Steven Rubinstein (31 years old) graduated from the Dutch Film Academy in 2013 and started working with IJswater Films directly after his graduation.

He likes to produce films that question an assumption he thought of as a fact and that use the medium of cinema to explore this question to it’s fullest.

More and more directors he likes to work with find stories all over the world and it is something that he enjoys about his work practice. Both the challenge and the adventure. Sometimes he finds a good question that isn’t explored through film and so he would like to find a way to be more open to other mediums in his creative producing practice.