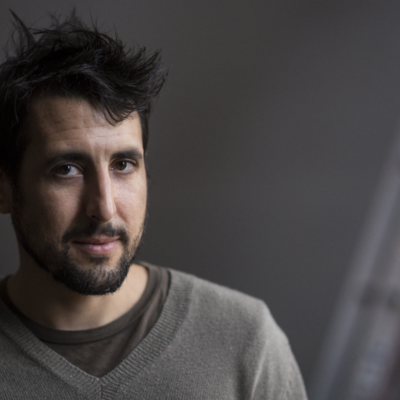 Nahuel Cano (Neuquén, Patagonia Argentina 1982) is a performer, director, and playwriter. He currently develops his artistic activity as director of the company El Cuarto (www.estudioelcuarto.com). His works have been presented in multiple international festivals and have received support and awards from national and international institutions. His last work, a transmedia piece was created between the Netherlands and Argentina. He is currently starting the DAS Theatre Master program in Amsterdam.

His field of artistic action is mobile, he explores the possibilities of performance, installation, cinema, dance, and theatre. As an artist and political activist, since 2015 he is a founding member of Escena Política (www.escenapolitica.info). This collective has organized actions, forums, performances, and political-artistic protests. At this moment he is working on his first feature film as a director.

At DAS I’m interested in exploring how fictional events “produce” reality. That is, how a performance can permanently or temporarily transform those who participate in that event, that plot, either as performers or audience. Due to the project’s own nature, I always outline these roles as blurred, interdependent and inter-modifiable, since: where does fiction live?

Out of this blurred relationship among roles, and the ambiguity of the territory which fiction inhabits, rises the idea of Conspiracy. A conspiracy appears as a strategy of explicit articulation between fiction and reality. A fabric of relationships and actions, which, in disguise, seeks to subvert social life.

However, conspiracy is also a symptom of our sped-up era, the crises of meaning. Today our narratives have replaced the fatality of fate for the infallibility of conspiracy. We’ve replaced existential angst for conspirative paranoia.