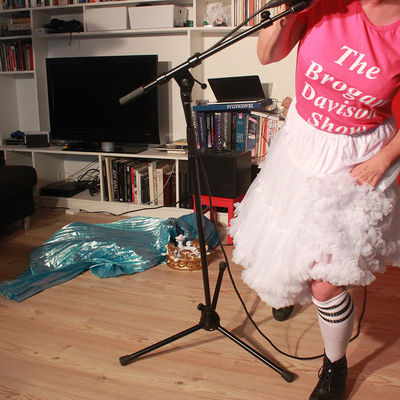 Brogan Davison is a choreographer and performance maker from the UK. Brogan graduated with a BA Hons in Dance Theatre from Laban in London in 2010. She then moved to Iceland the same year and met her long-term collaborator Pétur Ármannsson, later forming the Reykjavík based award-winning collaboration Dance For Me in 2013.

Their first project, Dance for me (2013), propelled them into the international performance scene and they have since made Petra (2014), Stripp (2016) and The Brogan Davison Show (2017), which have been presented in dance and theatre contexts worldwide, including: Iceland, Germany, Norway, Denmark, the UK, Finland, Italy, Sweden, Switzerland and Canada, in venues such as the Lókal Performance Festival and Reykjavík Dance Festival (IS), Mousonturm (DE), BIT Teatergarasjen (NO) and Bora Bora (DEN).

Additionally Brogan has taught at various institutions, including The Iceland Academy of the Arts, and since 2016 worked as a collaborator and performer for London-based performance artist The Famous Lauren Barri Holstein on the project Notorious (2017) which was presented at Fierce Festival, The Barbican and The Attenborough Centre for the Creative Arts (UK) and Everybody's Spectacular Festival (IS) in 2017.