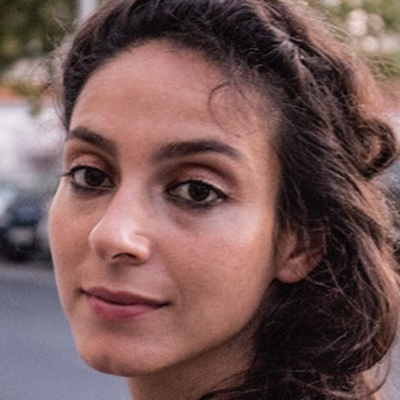 Sofia Dinger (born in Arouca, Portugal) is a performer and theatre maker who also writes her own plays. Her work arises from dialogues with the dead. In a way, her research has something to do with learning how to say goodbye, with transforming ghosts into tools. At the moment she is busy with a quote by Faulkner "The past is not dead. It´s not even past."

Sofia Dinger has won awards as an actress in Portugal and worked with several theatre makers, visual artists, directors and writers. She also works in film.

For the path she is taking in her work, she underlines the relevance of the One Space Project (a collaboration between three members of the Shared Spaces Network: Alkantara/Portugal, Exodos/Slovenia and KVS/Brussels, supported by Studios Kabako and the Qattan Foundation). This project took her to Palestine, the République Democratique du Congo and South Africa. She also was part of the Performing Arts Research Laboratories. Some of the people whom she considers fundamental to her trajectory, each in a very and subtle particular way, are Try Angle, João Fiadeiro, Mónica Calle, Mark Deputter, Thomas Walgrave, Rui Catalão, Faustin Linyekula, Jean Renoir, Proust, Tolstoi, Cassavetes and Jonas Mekas.