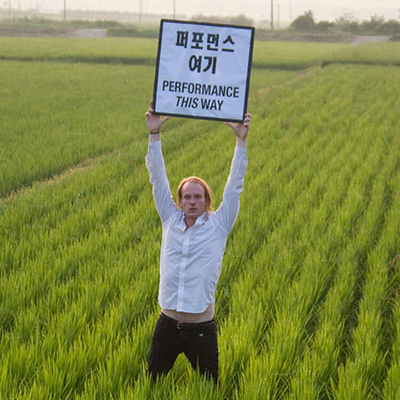 Orion Maxted (1977; England) is a performance artist and curator based in Berlin and Amsterdam.

His work takes a sideways look at language and cognition. Taking the Paris 1968 slogan ‘Take your dreams for Reality’ to demonstrate a working strategy - that the reality we perceive is not as fixed as it may appear but open to change through art. He sees performance (in a gallery, theatre or street context) as a frame to place and exchange thought, and hence considers his process part composer – positioning and transforming thoughts in time and space; and part sculptor - taking reality as material.

Orion completed his undergraduate degree in Music & Visual Art at Brighton University, England in 2006. He has worked with several international performance groups including protoPLAY and Non Grata; and worked as a producer and mentor for Testing Grounds an artist development organization operating in the UK and internationally.