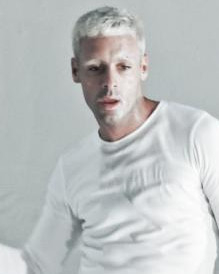 BIO
Matthew Day (1979) is interested in the potential of choreography to negotiate unorthodox relationships and propose new ways of being human. Utilizing a minimalist approach, he  often works with duration and repetition,  approaching the body as a site of infinite potential, and choreography as a field of energetic intensity and exchange.

Raised in Sydney, Day was a teenage ballroom dancing champion. He studied Dance and Performance Studies in Sydney and Melbourne (2003-2005), before collaborating with students at the School for New Dance Development (SNDO) in Amsterdam (2006-2009). Day has been an artist in residence, and presented his work extensively in Australia and Europe. He is currently based between Melbourne and Amsterdam.

CURRENT RESEARCH
Day’s current research develops a new line of inquiry into the relationships that are born between bodies, objects and actions, stemming from both human and inhuman forces. A speculative framing question can be articulated as: If we were able to remove human consciousness from the centre of the universe, what new intuitions, materialities and potentialities may emerge? Within this conceptual framework, Day is developing a series of studio based choreographic negotiations with different materials/things/objects/subjects/bodies.

The research seeks to unpack how it might be possible to work with materials, following the specificities of each material relationship, to produce distinct choreographic situations. Day pursues the research as a series of events taking multiple forms, in direct conversation with the material and virtual conditions of production - collaborations, work-sites, institutions, invitations, discourses, disciplines – reformulating the 'work of the work' as they emerge. Day seeks to further expand the iterations of the research, to challenge habits that he has developed in his work and to disrupt and disfigure the means of production and presentation.