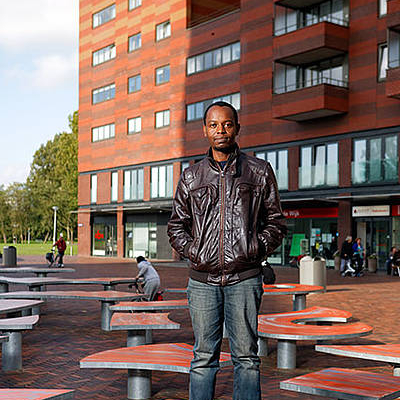 Ogutu Muraya (Joshua Ogutu) is a Kenyan writer, theatre-maker and storyteller. He studied International Relations at USIU-Africa. He has been active in Nairobi’s creative scene since 2007. He is currently the Creative Director of The Theatre Company of Kenya and previously worked in the editorial department at Kwani Trust. Ogutu is fond of writing and telling stories based on true events drawn past and living memories. His performance works strive to be entertaining and insightful while exploring and cross-examining complex cultural, social and political issues within Kenya and the region. He has been published in the Kwani? Journal and the Chimurenga Chronic (S.A).

As a playwright Ogutu has written several short plays and his full-length works include Are We Here Yet?, Four Strings in a Maze (Radio drama), and What Are the Odds?. His plays have been produced and performed in Kenya, Tanzania, Zimbabwe at Harare International Festival for the Arts, La Mama in New York City as part of Hybrid Theatre Works’ inaugural Global Spotlight Series (East Africa) and in November 2013 as part of PopUp Theatrics Long Distance Affairs at La Bienal Arte Joven Buenos Aires in Argentina. In 2012 Ogutu translated and adapted William Shakespeare’s The Merry Wives of Windsor into the Swahili, Wanawake wa Heri wa Windsor. The adaptation premiered at Shakespeare’s Globe Theatre in London as part of the “Globe to Globe Festival” and later toured India and East Africa.

During his time at DasArts, Ogutu will step away from his characteristic issues-based and output focused theatre. He wants to explore the creative process, create new artistic interventions, develop and rediscover new and alternative ways of theatrically engaging with audiences by expanding his interpretation of the dramaturgy of dialogue.