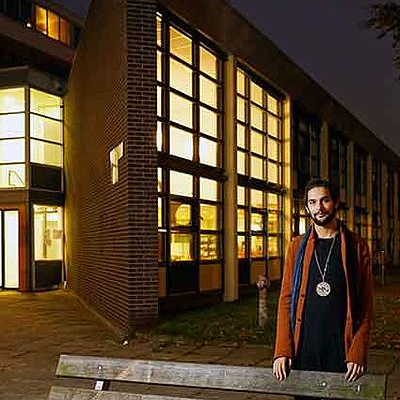 Astrit Ismaili (1991, Prishtine, Kosovo) is a multidisciplinary artist working in theater and visual arts. He performed for the first time when he was 5 years old as a duo singer with his sister Blerta and since then he has been exploring performance and other mediums of art by shifting or mixing them. He studied theater directing at the Faculty of Dramatic Arts in Pristina, Kosovo. In the other hand Astrit has worked as a freelance visual artist using mediums like photography, video installation and performance art.

His work is an intimate experience that operates on the family themes, gender issues, perception and transformation. Astrit's work often reactivates abandoned or construction zones by creating massive performance art pieces, interacting and working with people from all the ages and profiles. An example of this is the big performance art project he co organized in 2012, "Prishtine-mon amour", in which during one hour 2500 people came to see it.

Astrit's performance events and environments sometimes doesn't involve the public, but he documents them through video or photography by creating another layer of his work that can be presented for secondary audiences.  His work has been showed, performed and exhibited internationally in solo and group shows in New York, Vienna, Zurich, Ljublana, Brussels, Istanbul, Munich, Hong Kong, etc. He is a winner of Young Visual Artist Award 2011, a resident at ISCP New York City.  Skena Up International Student Festival 2011 Best Director Award, the winner of Forum ZDF follow up GRANT 2013 and Best Video Performance & Best Styling Video Awards at Video Fest 2014.