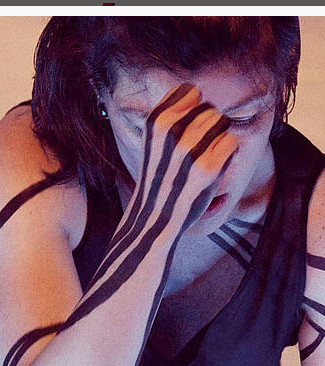 I've been using different strategies to build that, through the activation between different senses, imagination and the belief in forces that are collaborating with our actions. Each one of these strategies or their combination, have the potential to articulate different sensory states. I'm interested in giving the same status to bodies, beings and things. During the master studies, I intend to create contexts for creation and dialogue with artists, therapists and religions.

Michelle Moura, dancer and choreographer, lives in Curitiba/Brazil. Co-founder and member of the Couve-Flor Minicomunidade Artística Mundial, from Curitiba. At Casa Hoffmann, she has co-created and organized collectively the weekly performance event Ciclo de Ações Performáticas.

She has performed and collaborated with Dani Lima (BR), Alex Cassal (BR), Fabian Gandin (Argentina) and Vincent Dupont (France). In her last creations CAVALO (2010), Big Bang Boom (2012) and Fole (2013), she develops strategies to temporarily respond to the question “what moves a body?” Her pieces are being presented in Brazil, Uruguay, Chile, Cuba. She has studied psychology and left the course to start dancing. In Curitiba she studied at Casa Hoffmann – Center of Movement’s Studies. She was part of "Essais", at the Centre National de Danse Contemporaine d'Angers, France (Emmanuelle Huynh, Artistic Direction), where she established a dialogue with her mentors Jennifer Lacey and Nuno Bizarro.