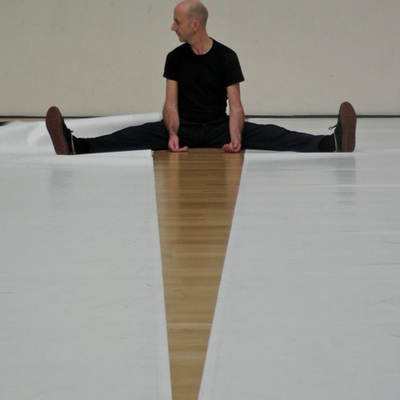 Günther Wilhelm was a long-term member of VA Wölf’s NEUER TANZ and worked as a dancer a.o. with Dumb Type and Anna Huber. Since 2001 he is collaborating together with visual artist Mariola Groener under the label WILHELM GROENER. In their work the artist duo combines elements of dance, performance and installation. With a predeliction for the odd and absurd the body is the medium for reflections and transformations against the backdrop of social and cultural processes. The pieces Vorgang benutzt - Monoschwärmen bis das Material greift, Paravent privé and Hotel Hassler were invited to the German Dance Platform in 2000, 2006 and 2010. WILHELM GROENER is headquartered in Berlin.

Günther: "I like to work with the fragmentation of body, movements, images, language. By looking at those fragments from different perspectives and by rearranging them, I try to create a shift in what might be known already. Thus creating a space of the between, the unknown, the ambiguous which also provides an openness for my own and the spectators´ view.

Scooping out of the experience in my body and adding new layers of learning is an ongoing challenge in the choreographic process. As a starting point for my research in Amsterdam I want to focus on the question of possible relations between text, language and movement. My interest is to set up different experimental approaches for using texts to create a physical space of experience. How does the written word sediment in my body and how can I find a way of physical communication or friction with it? Is it possible to add a different layer of meaning to the text? Can I create an autonomous space of physical language which is dependent and at the same time independent from the text source? And how does that autonomous space then interact and communicate with the spectator?

With these questions in mind I want to establish my practice based research aiming for a collection of choreographic miniatures which could be considered as a protocol of experiences."