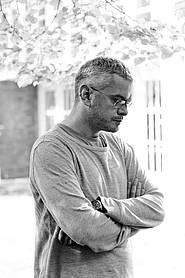 Born in 1977 in Belgrade. Theatre maker active in both institutional and independent theatre. His interests in theatre and performance include collective authorship/curatorship, post-drama text/language-based performance and theory-as-practice. MA in Theory of Arts and Media at University of Arts in Belgrade where he is also PhD candidate; BA in Theatre Directing at Faculty of Drama Arts, Belgrade. Author, director and performer of numerous pieces in Belgrade, and several in Vienna, Lyon, Stuttgart, Gent, Zagreb.

Artist in Residence at Akademie Schloss Solitude, Stuttgart 2004 and 2005/06; Les laboratoires d'Aubervilliers, Paris as part of TkH project How to do Things by Theory 2010; and Artslink/New York Theater Workshop, New York 2011.