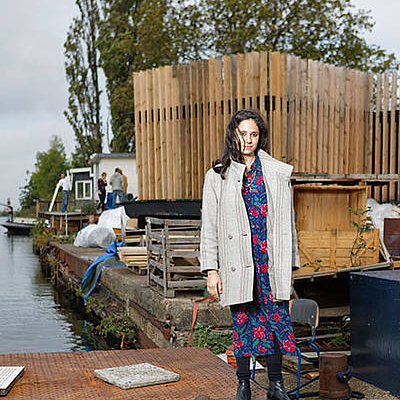 Ana Wild (1987; in Tel-Aviv, Israel) Is an independent multidisciplinary artist; with a focus on music and theatre. She is a writer, performer, director, songwriter and lighting designer, graduate of The School of Visual Theatre in Jerusalem (2008-2011).

In her work, Wild uses music as a structure for looking into typical human behaviours, and to challenge terms such as opera and the musical in order to utilize audio-stage relationships in new ways.

Since graduating, Wild has:
Directed a staged concert for the rock band “The Compromises”, performed at “Experiment” festival in Tel Aviv, 2011;
Created the stage piece “When Shall We Girls Meet Again?” in collaboration with composer Avner Hanani, commissioned by “Hateiva” center of new music in Jaffa, 2012;
Co-created and performed the piece “An Autobiographical Encounter” together with Ari Teperberg, in the “A-Genre” festival in Tel Aviv, 2012;
Took part both as a performer and lighting designer in a few productions of “Zik” group;
Ana had both directed and designed lights for the show “Heidi” by Inbal Yomtovian, produced by “HaZira” theatre in Jerusalem, 2013;
Recently created a new stage piece named “Oh, Marco!” - a pop opera, commissioned by The Performance Convention held at the School of Visual Theatre, 2013.

For more information go to: www.anawild.com