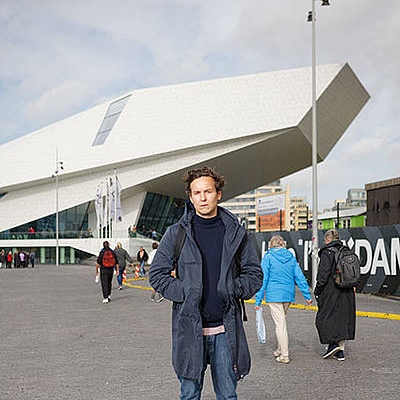 Alexander Giesche (1982) calls himself „PERFORMANCEINSTALLATEUR“. In 2011 he graduated from Angewandte Theaterwissenschaft at Giessen University. Since his first performance, all projects relate on a strong visual level: His „theatre“ is a laboratory trying to modify the conventions of the genre and succeeds in creating a world with blurred outlines, circulating in between performance and visual art, movement and paralysis, dream and matter, sounds, language and silence. His RECORD OF TIME  (a collaboration with Lea Letzel) brought his work to international attention. For Freischwimmer Festival  Giesche created together with Lina Hermsdorf the work BLACK OR WHITE that was produced by Mousonturm Frankfurt.

During his studies at DasArts he was Artist in Residence (2012-2014) at Theater Bremen where he developed his „visial poems“ DER PERFEKTE MENSCH and LOST together with opera singers, actors and dancers. In autumn 2014 he was named as „young director of the season“ in theater heute critics poll.

With WORLD OF REASON in 2015 he will be taking another step towards an appeal to a new generation of audiences for Theater Bremen.