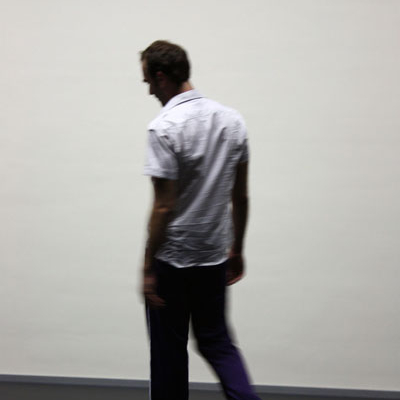 Jorge Gonçalves is a choreographer, performer and teacher. With Ana Rocha, he co-directs the Portuguese based structures Obra Madrasta and MEZZANINE.

Since 2006, he has been making his own work in collaboration with several artists such as Ludger Lamers, Ana Mira, Isabel Valverde, António Caramelo and Ana Rocha. His own productions have been presented internationally: Duet (2006), Fiction (2009), Gilet (2009), Antoine (2010), Third Act (2010), Open Season (2011), Conquest, Deborah Hay's solo adaptation (2011). As a dramaturge, he has worked with Daniel Kok, Keith Lim, Ana Rocha and Goro Tronsmo. As a performer, he is engaged in different projects for several artists: Isabelle Schad, Né Barros, Tobias Hering, Emre Koyuncuoglu, among others.

He has worked as a teacher with institutions in Portugal and Germany.

I am interested in how the circumstances of performance can be revealed in a frame that proposes a reflexive space for the audience through strategies of visibility/invisibility and reality/fiction. I am interested in bringing gestures, actions and discourses to the surface to see how they affect the frame of the performance.

Working in a practice that relies on specific mechanisms of translation and appropriation, I am intrigued by the various possible articulations existing within the resonant relations between language and body.

In the Amsterdam Master of Choreography I have continued researching the different relationships between observer and observed; how the performer is informed and can be informed by outside feedback, in terms of how he/she achieves emotional states, spaces of imagination or different realms.

A suspended gesture from me to you