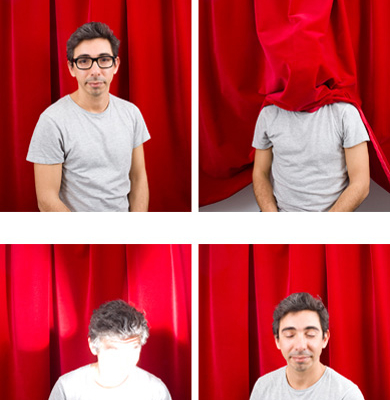 Two actors, while shooting a movie, had to start a new scene after supposedly having run for a long distance. One of the actors went running before shooting the scene to feel tired. When he came back, sweaty, breathless, ready, the other actor asked: "Why don't you just pretend?"

The feeling of strangeness with Representation is a common denominator in my work. If there are manifestations from other worlds, this must be it.

Pedro Manuel (1980) is a Lisbon-born and Amsterdam-based theatre scholar and artist, who studied philosophy and theatre and had his own company in Portugal before he came to DasArts, having also worked as a theatre programmer, critic and teacher. Pedro started a PhD program at the University of Utrecht (supervised by Dr. Maaike Bleeker) parallel with DasArts, researching the possibilities of theatre without actors, namely performances with spectators, non-actors, technology or plain matter.
At DasArts, he positioned himself artistically in relation to his artistic and theoretical inspirations — such as acting in participatory theatre, emptiness in conceptual art or politics of representation — coming to understand how to question himself better rather than answering his initial question, describing his works as ‘play essays’ and ‘affective pieces’.
In Pedro’s Master Proof “Short orgasm about the theatre” - written and directed by himself —the characters of a parrot and a monkey performed a series of demonstrations questioning whether it is still possible today to play 'distancing effects' in the theatre.
Currently, Pedro is finishing his PhD, preparing a lecture-performance about 'how the invisible appears' and raising his baby son.